This week has been abysmal weather!

So SOOO very cold. Not to mention getting stuck for a few days out of town at my mom's due to a blizzard that blew in Sunday. Monday the win was blowing an there was little to no visibility. I tried driving and turned around and came back to mom's. No visibility, high winds, and slick. I had a sick feeling and just thought no way I wanna be in a ditch in THIS cold!

I figured give it a day and it will blow over. Tuesday got worse and they even shut the main highway. Finally Wednesday I could drive home!! RIDICULOUS temps too. So I did some awesome gym workouts with my sister in the meantime to keep up with my running streak!

We knew we were having a cold snap, but the forecast for December 7th was about -15C (5F)...so doable. Yes, yes I will do the Santa Shuffle. It's ONLY 5km. REally, I have run in colder...don't be a wuss. Besides, Sophia and Susan are doing it. And so are Jenn and Sherrey. I can't wuss out. THEN Friday we wake up and it is -30C (-22F). Oh AWESOME. Better start getting psyched up for this beast!

So I set out all my gear...let's see. a couple base layers, a midlayer and top layer and and EXTRA LAYER.  The santa hat and Sparkle Skirt are there for fun...do they make fur lined skirts?? Seriously. Skins on underneath some winter weight tights. I have never ran in this many layers. Nor have I run in this cold. Oh it won't be that bad (SAID THAT BEFORE...)

Sooo Saturday I get up and see the temps... 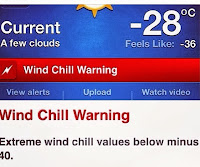 I believe a few curse words along with the obligatory EFF THIS were uttered.

Anyways, parking is a beast and I finally get there and as I am walking out the door the race is starting. So I haven't had a chance to suss out where everyone is. SO best just go. By the first kilometre my glasses are not just fogged. they are iced over. FFS. HAHA. This is comical. And effing Cold. I trudge along. At the last kilometre Sophia whizzes by. I went out fast and no way could keep up my pace. ha. I need to slow down and pace myself. Really it was a nice run out in the horrendous cold. I was just happy to be done. I think I ran it in about 36 or 37 minutes. Given that I walked in some icy patches, it isn't bad. Not at a personal best, but seriously its redic weather, snow, ice, this was a fun run...not a go kill it run.  BUt I did it. It's done...lets get some dorky pics! 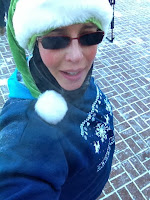 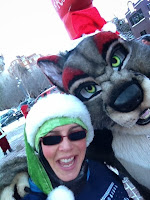 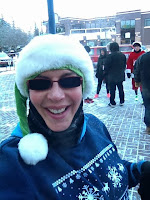 I waited too long and all the frost fell off my lashes! 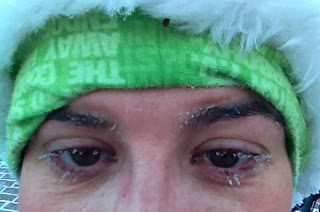 I bet you are all saying...oh what a CUTE Christmas sweatshirt!! Look closely... 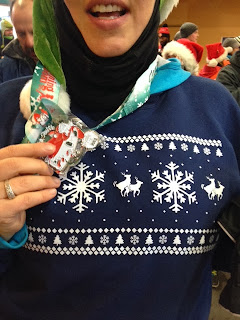 Why YES. Yes, it is humping reindeer! Why would I have something classy???
Funny thing...people often never notice this perviness.
OR they say what a cute sweater THEN gasp when they see WHAT is really going on!

Then I ran into Jenn! 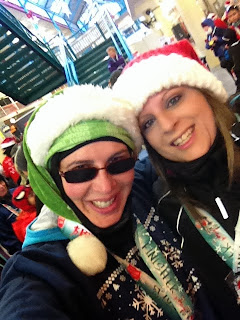 And Susan came across the finish and thru the doors to collect her medal! 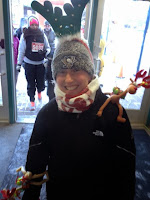 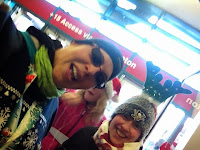 And SHe was so cold I had to direct her to the right...to where the Calgary Stampeders (our Fab CFL team) were giving medals. At first we get the medals and shuffle away. The cold addled our brains! The we swooped back in line for some pics hoping those big beefy hunks would warm us up!! 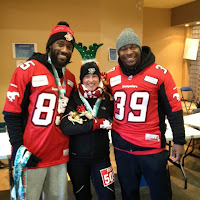 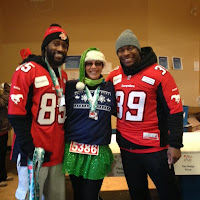 Yes, these hunks of burning love did add to the fabulousness of the race. Good lord such nice warm hard bodies at the finish...they need to be there every race! Definitely the HOTTEST part of this redic race. It was a hard run. Well really minus -36C (-33F) is awful to run in. Short distance is OK. THANK GOD it was not a half marathon...Feck. Can you imagine? Not sure it would be doable, frankly. I was NOT warm enough in what I had on even with 2 pairs of tights. Need to research winter run tights for sure before February's half mara!

Today I ran inside. I just couldn't run outside again. Really hating on winter and mother nature right now....

I should add that all photos were taken AFTER I removed the gloves, mitts, balaclava, extra buff, and neck warmer.