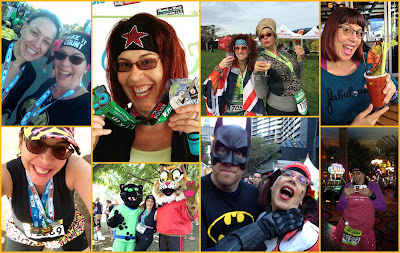 And the BLING! Did I mention the BLING?? 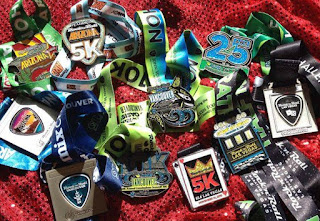 The medals from these 4 races are so awesome! 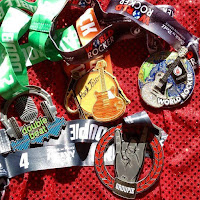 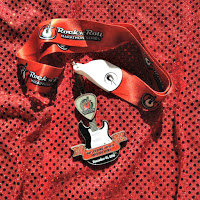 As are the HEAVY MEDALS and the Virtual Run Medal! 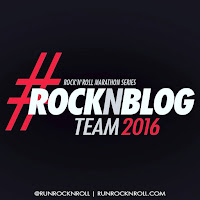 Rock n Blog gave me such an amazing opportunity to meet so many, many amazing peeps. People from all over I call friends and in my good and bad times they have lifted me! So even though I was feeling terribly down I applied for RnB for 2016. And, am super happy to say that I am in. HUZZAH!

Soooo, what's up for 2016?
This year, members of the RocknBlog team recieve a Global Tour Pass so I could run unlimited Rock n Roll races anywhere ALL YEAR! I have never been so excited and so heartbroken at the same time. Check out ALL the Rock N Roll Tour Stops 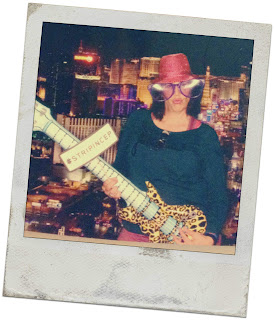 Even though I REALLY wanna run a European race, there is no way I can get there this year!
Clearly I have to win the lotto OR make some choices. My current DREAM LIST is ... 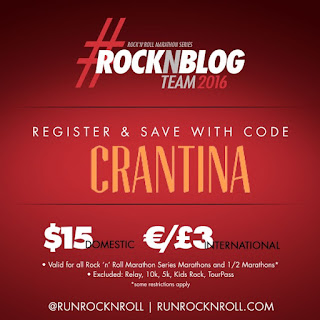 In North America: Get $15 off any Half or Full Marathon (*except LA, Savannah, Chicago, Las Vegas, Queretaro, San Antonio (I shall  keep ya posted if I get a code nearer these races!)

In Europe: Get £3 off any Half or Full Marathon

Join in on ALL the fun!!

You know you WANNA
#rocknblog
#allthefab

So a while ago, I decided to go to Red Deer and run a halfmarathon. I have been feeling rather MEH of late so I didn't post it ALL OVER social media. I didn't really even tell anyone I was going - only a couple of girlfriends knew.

A couple weeks prior to the run, I was out with my pal Melissa - and mentioned I was waffling over the race. Partly as I didn't want to get up at  the crack of dawn and drive. As we ran, she said OK it n's settled. I will drive. ROADTRIP!!!SO really why i didnt want to drive alone was due to the fact that I would not get home on Friday til midnight from work. Getting up at 530am and driving almost 2 hours, running the half, eating then driving home to change and be back to work by 3 ... sounds SUPER awesome. And not so appealing on one's own. SO was stoked for the company.

Let me start by saying Saturday came damn early (those friday night shifts are killin me!) ...but we had coffee and smoothies for breakie. So that was  a bonus -- as was the glorious sunrise! 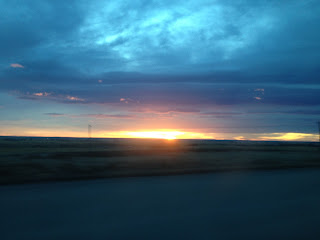 We arrived about an hour before the race, which was great. Time to stretch, lollygag before race, get everything organized, debate on what to wear...and how much it would warm up. It was cool (but seriously unseasonable warm for this time of year) AND  would warm up about 10 degrees during the run, so I wore a long sleeve icebreaker and stuck with the awesome inknburn flower motif! Springy weather calls for flowers!

Before I knew it it was go time! It was a small race - less than 120 people. The RD let us know in the pre-race briefing that the trails were mostly clear. About 17k of the trail was clear, but there were large ice puddles and some snow.

Whew...and so Melissa gives me the high5 and sends me off to the start area. 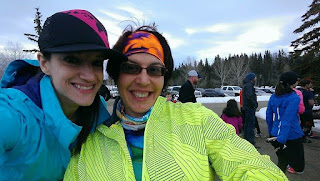 Considering we ARE in Central Alberta (cooler with more snow) the RD's description is positive. And, besides, we have had the warmest weather on record...so this is great!  I tell Melissa I will come in at 245 if there is some snow. My pace will be off a bit as I am not as high in mileage and speedwork as I would like. But it's all good. This run is a run. Not racing, just getting my damn mojo back. I have been dreading for months that for some reason i can no longer run a halfmarathon. And dammit, my stupid anxious brain is NOT winning that silly argument.
And so we are off. Within a minute we all stop to single file get on a snowy path (haha this has happened on some trail races, no big whoop) .Within 1km, I realize the mostly clear path statement at the start of the race is NOT so accurate. But I have hope it is clearing up. Right Away. ummmm. nooooo. Within 4 km I turn around and snap a shot ...of the pathway. 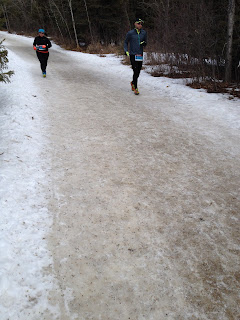 Mostly I snapped it for Melissa- cause she said - hope its not too icy! Be careful out there. FACK. 4km of this makes a mind drift into WHO'S IDEA WAS THIS territory. And I wanted proof. Because I knew my Calgary pals would not believe me - since we are running on perfectly awesome clear paths.

I want to make this CLEAR. Its a winter run. There is snow. There is ice. Given our warmer temps over the past month...there is bound to be ice. BUT CRAP. This sort of blows. In that first third of the course we also run through an area where folks have dogs off leash. Not so bad (but sort of scary if you are like me and afraid of dogs). I make it through unscathed and hit a clear(er) area with some great views. 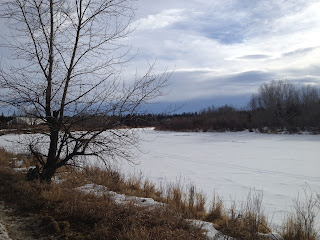 Yes...Back to this is lovely and I love winter running! 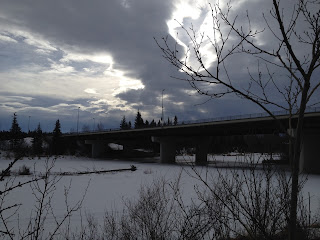 I finally hit a groove - am mostly running alone with about 6 gals in front of me and 6 behind. At the 10k sign I am sooo over it. That might have been due to a snow and ice covered hill and incline section that seemed to go on for a few kilometres just prior.  But I vow to plow through. I make up some awesome time in the bit before the turnaround and the 4k back downhill. And, of course have to capture the encouraging art #seenonmyrun! 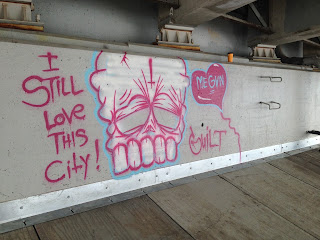 So...I have 5k left. I have seen two gals bite it hard. Past two limping and dejected. Stopped to talk one into not quitting, and had a positive uplifting effect, I hope. Listen, this race is not what I had wanted...but in terms of it helping my mojo? HELLS TO THE YES it is working. The wearther is fantastatic (the ice parts blow chunks - but I am pushing and trying to compartementalize each segment into awesome, strong, and f*ckit bucket). At this point I about to hit to DOG area again - though have already be jumped on by a few larger pups. I think I mostly remained calm over this - they were friendly sorts. But I do not respond well to large animals bounding towards me. I vow to get er done. A couple quick shots of the snow and a smile...and off I go! 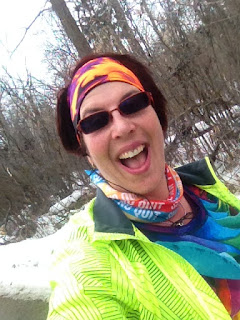 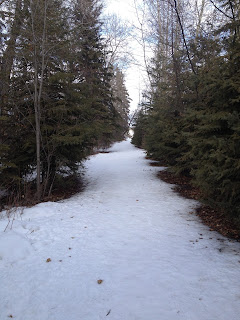 In terms of how the icyness affected me? The last 4k took the same amount of time as 6k usually does. (piss moan whinge). I had a moment of this is utter failure. And then it was NO WAY. This hoor is almost done. And YOU will smile at the end and be ok. The time of this race does not define you. The effort and smiles do. Dammit, that last k was all grit and smiles and sweat, not to mention some slick sticky snow! I was happy to be done, happy I pushed through. I may have laughed and said as I crossed the finish - I may have accomplished my personal worst  but what a great day for a run!!

A couple steps later I as smiling laughing stretching a bit and Melissa snaps this.
I just knew I could not be "disappointed" in the effort or the result. Sure, I didn't run it in under 245. And its not close to my times in the 230s a scant few months ago. BAH!!! But I finished. I was not bleeding or limping like some finishers. My training runs just got a renewed  re-boot. The only way is UP. Let the asswhooping and training begin - 11 weeks til Calgary Mara!

And of course eggs bennie was on the brunch menu. I scarfed down breakie and didn't take a photo! HA ... it was yummy! Eggs, pancakes lots of toppings,coffee, and laughing about the race. It was great.

Driving back to Calgary we chatted about the race, upcoming runs, and high5'd over the fact that something VERY significant happened. It was, indeed, a GREAT day!


And let me tell you when I got home from work at midnight I fell asleep as soon as I hit the bed!