A couple month ago I was sent some ENERGYbits for review. I was quite excited to try it as I had a couple half marathons coming up. And, I was tired of gel and upset tummy issues.

I broke out in shingles. UGH. Shingles is a sucky. Little to no energy, achy, super tired and well general overall feeling like crap. I didn't feel I really could give this a try. At least not until I was feeling a bit better. So I waited a few weeks to try the bits out!

I read through all of the information that came with the tins of bits. I like what I saw. I do have a marketing and communications background, so I notice packaging and writing. I liked the look of it. Bright, clear, visually appealing. Easy to read. 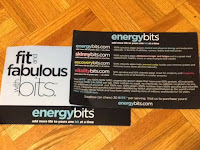 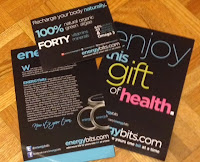 I figured from what I was reading these supplements were a great alternative. Lots of bloggers were saying they were using them instead of gels. So my interest was piqued.

When algae is taken prior to any activity, including a fitness class or workout, it improves your energy, increases your stamina, clears your mind and eliminates fatigue or hunger. When taken after a workout or any strenuous activity it also cleans out toxins, speeds recovery, reduces inflammation and helps build lean muscle. Not bad for something straight from nature that was the first plant on east 2.5 billion years ago.

Sometimes getting moving in the morning is hard. I am not always awake before I need to go for a long run. I was totally hoping the bits would help with sluggishness. I tried em for a few days and liked how I felt. Then a pal of mine who gets a runnerbox gave me her sample, too. And, in the meantime I ordered some extra samples so I could have more than weeks worth.  I know a bit unconventional if one hasn't tried em... 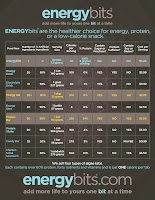 But I liked what I read.


They are made with ONE ingredient: spirulina (algae).

Spirulina has the highest concentration of protein in the world – 64% – all in the form of essential amino acids for muscle, health and cellular growth.

Apparently the Aztecs used spirulina. Astronauts and Olympic athletes have used it. HA! Something about that appealed. Or rather saying I had something in common with this unconventional group appealed.

So how did I like ENERGYbits?
I had enough bits to take them for a few weeks. I have to say I took 15-30 each morning with a greens smoothie. I didn't take them on rest days as I wanted to horde them for running! I took them on days I went to the mountains for a hike. And on long runs I took them before and during a run. And, on long runs I did not have issues after a run. I never had those moment of getting home and freaking out because I needed food NOW. I was never faint with hunger. Nor did I have major issues with my tummy and bathroom breaks, like I sometimes do when I have when I have taken some chews or gels. 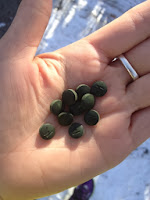 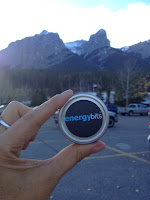 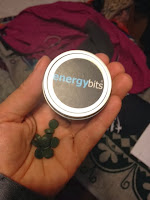 A HELPFUL HINT: take your bits with water. SWALLOW whole. I took about 5-10 at a time with a few sips of water. DO NOT CHEW. Unless you REALLY love the taste of wheatgrass.

I often suffer from heartburn. Not once in taking these tablets did I once have burpy repeat!

And, I will be very honest and say I never did have a PB at any time. But again, recovering from a viral infection takes a bit of time. And I couldn't put in hardcore training barbecue of that. However, I  had a noticeable improvement in energy levels. I noticed on the days I didn't take them that I did not have as much energy. I had improved energy in the past few weeks. I think I also felt less "snacky" when I took bits. I like that 'bits don't contain any caffeine, chemicals, sugar, gluten, soy, animal products, or artificial substances. JUST SPIRULINA.

I love the travel tin, but I will am a bit of a klutz. How was I going to carry them on a run? I used a ziplock bag to keep 10 or so in as I knew I wouldn't be able to open that tin while running.
I also saw a great idea on twitter – use a tictac container to carry your bits. BRILLIANT!
I have actually ordered some (it's my christmas present to me) and am totally looking forward incorporating them into my looming marathon training season.

You can also enter to WIN an ENERGYbits sample!
a Rafflecopter giveaway

ENERGYbits are only available at ENERGYbits.com. Jonathan (their Brand Manager) is happy to connect YOU with a current ambassador to share a discount on a bag of bits - you can email him at jlevitt@energybits.com

ENERGYbits provided me with a free sample of this product. I was under no obligation to review it. Nor was I under any obligation to write a positive review or sponsor a giveaway. All thoughts and opinions expressed in this post are my own.