Woke up this morning an put in a run! Last run of the year.

After struggling for most of the month with COLD, and then a severe case of bronchitis - with a doctor's stern warning to NOT run - it was a tough month to get miles in!

Here is my month in recap: 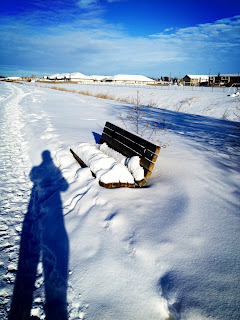 Woke up this morning an put in a run! Last run of the year.

After struggling for most of the month with COLD, and then a severe case of bronchitis - with a doctor's stern warning to NOT run - it was a tough month to get miles in!

Here is my month in recap:

This streak started out fabulously!!
Once again I joined Strides Run Streak for December! Had to do minimum 1 mile each and every day. Well, not so bad, since I promised to walk to work or home, or both every day.

Been struggling with a piriformus issue, so was doing LESS mielage, but i figured a 5k each day wasnt too hard to ask for.

I had a few great runs. Dec 8th was cold but a great 5km with Strides group. Even with it being -25Celcius. Rude!!!  Got in some more runs each and every day, nothing too major. Then on Dec 16 I had a amazing 8km run, felt awesome, then the "flu" hit the fan!

The next day i felt like i was run over by a trick. A few days before this I had struggled with a cold...so I  drug myself to the doctor's office. I walked the 3km downtown to ensure I kept moving. At the Docs I was soundly scolded and sent home to bed! With a bad case of bronchitis. And a 2 week supply of antibiotics. Doc said i could walk but no long runs. booooo

I tried to argue, but she outright said you have liquid in your lungs. Unless you want to spend Christmas in the hospital STOP RUNNING.

Then I got home to my parents  and thought WHEW...home free off drugs, time for running to commence. And i became nursemaid. EVERYONE in that house (sister, nephew, mom, dad) and my cousins house, and two aunts houses ALL got the freaking flu. I had to help care for my poor sick nephew while his mom barfed. The only two who remained unscathed (please knock on wood please let it stay that way) was ME and my 11week old nephew.

Still I managed a few shortie runs. Though all my runs from the 28-31 were all 5km and under, they were great. Warmer weather and it was so nice to get back at er after being so ill.

This year went out with a bang (hey even my engine blew in my car!!!) so i am hoping for some PBs in 2013. Need to plan out my races and training and kick butt...
Posted by Unknown at 21:45 No comments:

I went for a run this morning. I took my OLD trainers with me. To put them in the donation bin. As I put them in, I felt pretty amazing. I realized they weren't jsut any ol' trainer...they were my buddies who had seen 6halfs + 2maras. I have yet to find a pair that make my feet as happy. 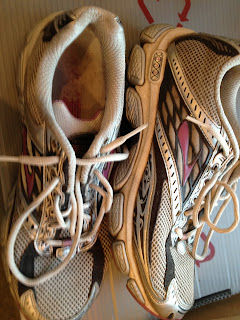