This past weekend - on Sunday - I did a 25km race! A trail race -- Rundle's Revenge! This was a tough race. It was on trails I normally do not run (though I have run several times in Canmore Nordic Centre). It was significant hill-wattage. 25km, with over 400 metres of climbs. TWICE. This would be two laps of a 12.5 km loop. DEEP BREATH in! It was a challenge, but I was up for it. 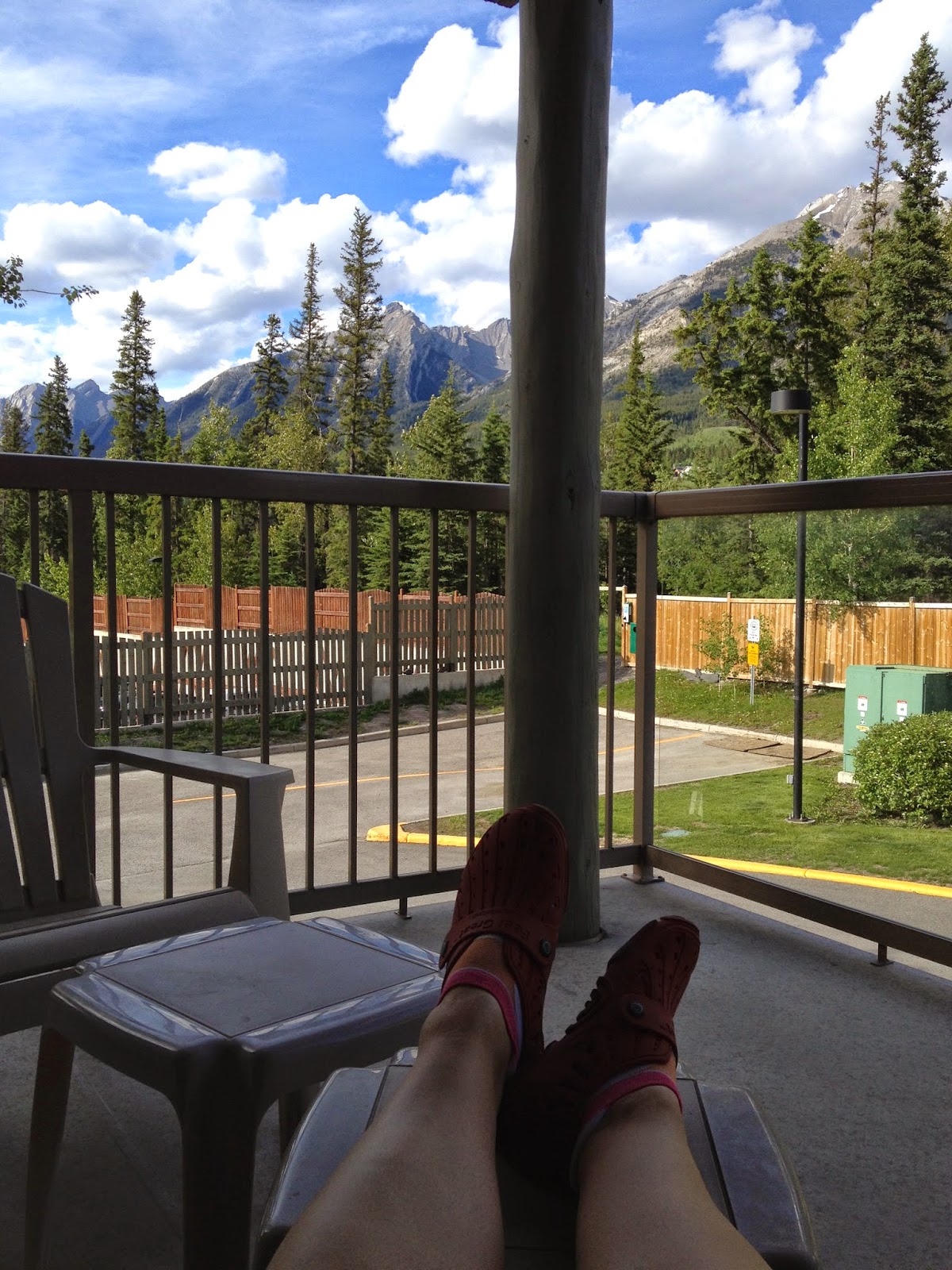 ***********************
So let's back up a couple days...I went for a short run early Friday morning. PIIIING. I took a step and all of a sudden felt a snap in my calf not unlike a VERY large elastic band. Charleyhorse! Hooly Crap! There were tears. I was freaking out. I on purpose didn't write about it, lest I lose my shit and start posting chicken little sky is falling type posts. Instead, I raced to my chiro. Let him do a little ART (active release). Raced into a fav little running shop (TRI-IT) in part to chat with Richelle to have her talk me down off the ledge - and then I bought a new tank top - haha. I came home, iced and stretched, and iced and stretched. The next day i did more of the same. It felt better, but was still really tight. I was prepared not to run. But kept calm (ish).  Once I got to Canmore on Saturday evening I took a salt tablet to see if that would help. I did more stretching and rolling. I felt so much better. But nervous. This had never ever happened before! eeeek!!!

***********************
The morning of the race, got up took another salt tablet. Got my race face on and got ready to roll. I was off with my great pal Michelle and one of her oldest friends Susan! These women are seasoned marathoners, but not really seasoned trail racers. So we all were facing challenges but excited and ready to conquer! 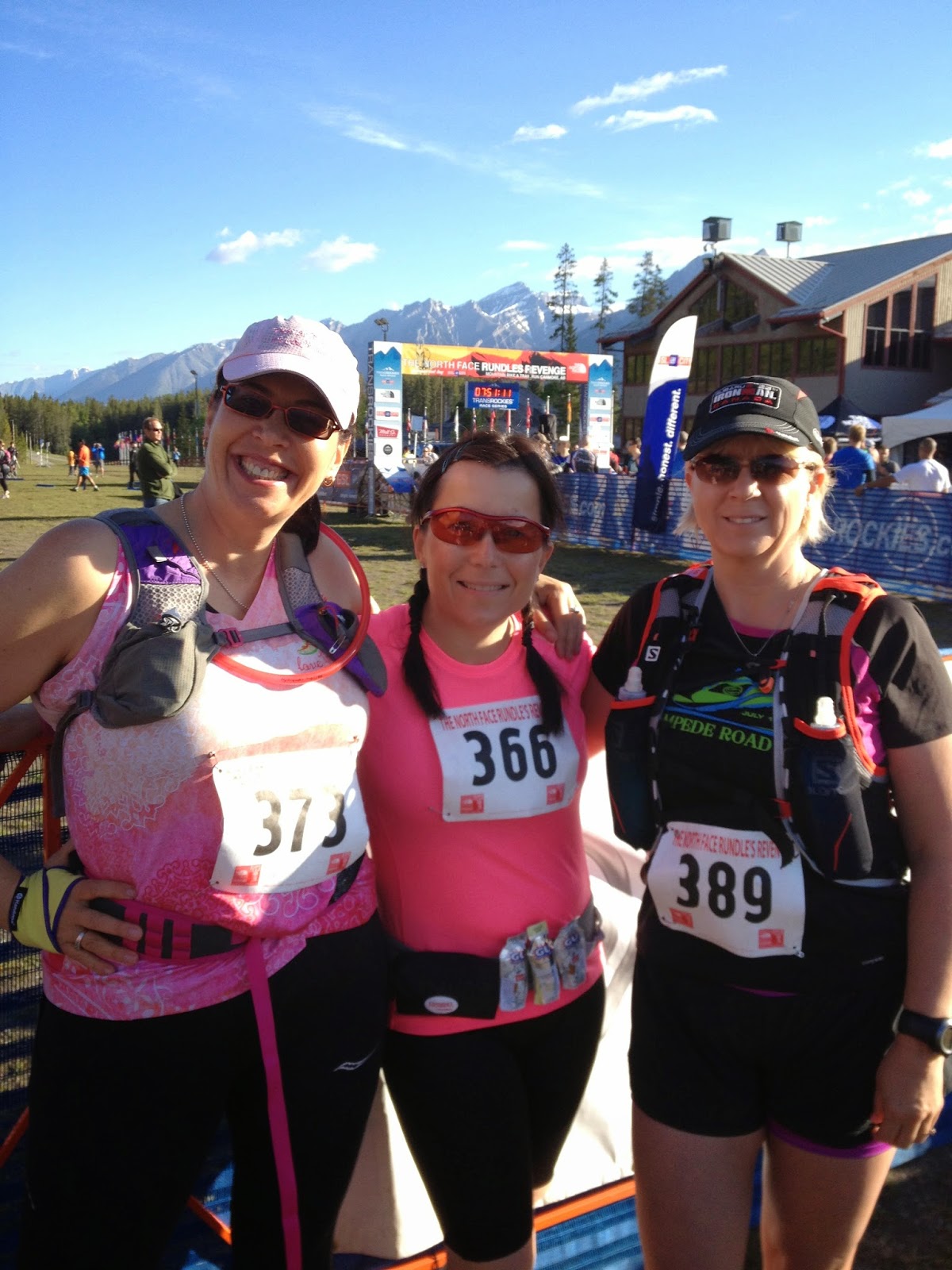 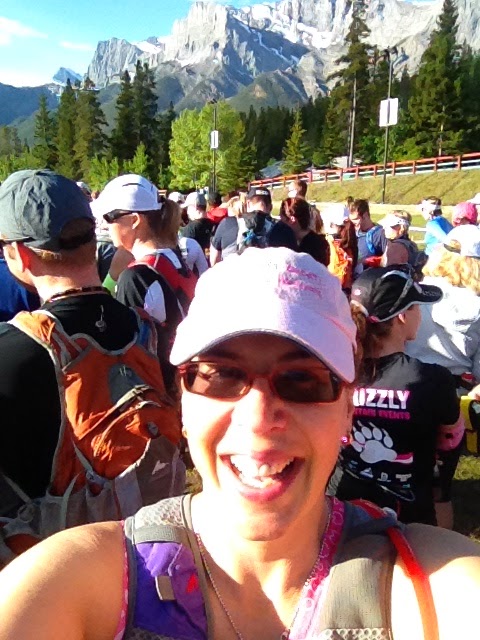 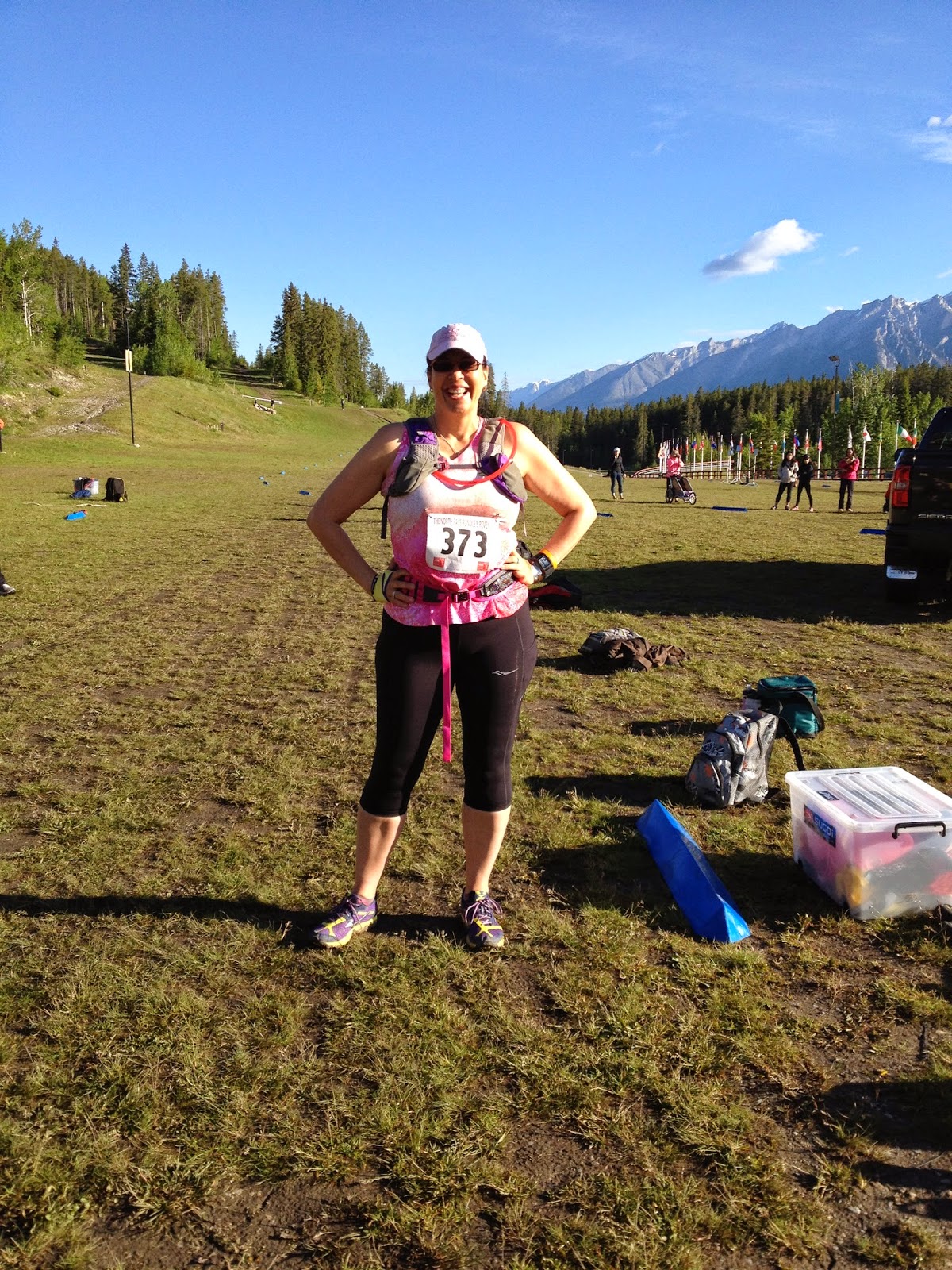 And off we went...I watched in awe at all the amazing runners, these fab, fit beasts!
(these are the proofs of the race pics...but man they show off the area - so gorgeous!) 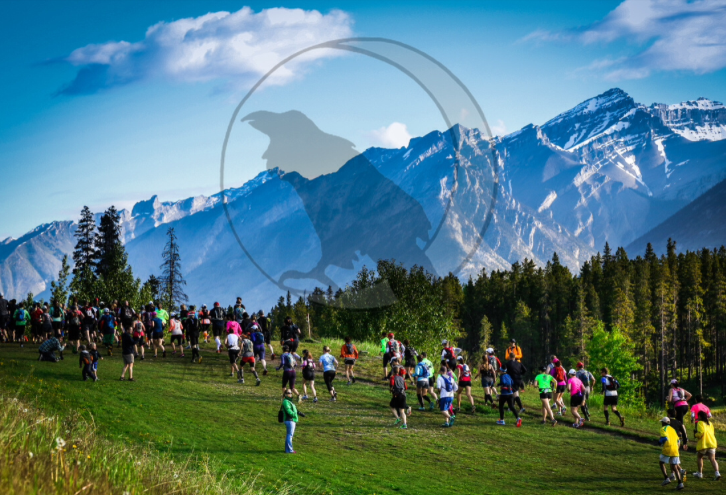 Really the first few kilometres (like 5) were straight climb! Just breathe. This is a traiing run, keep a nice pace. Don't trip! I kept telling myself.
The trails were rough, rocky, technical, mostly all single track.
Hill. After hill. After HILL. it was "hilly". 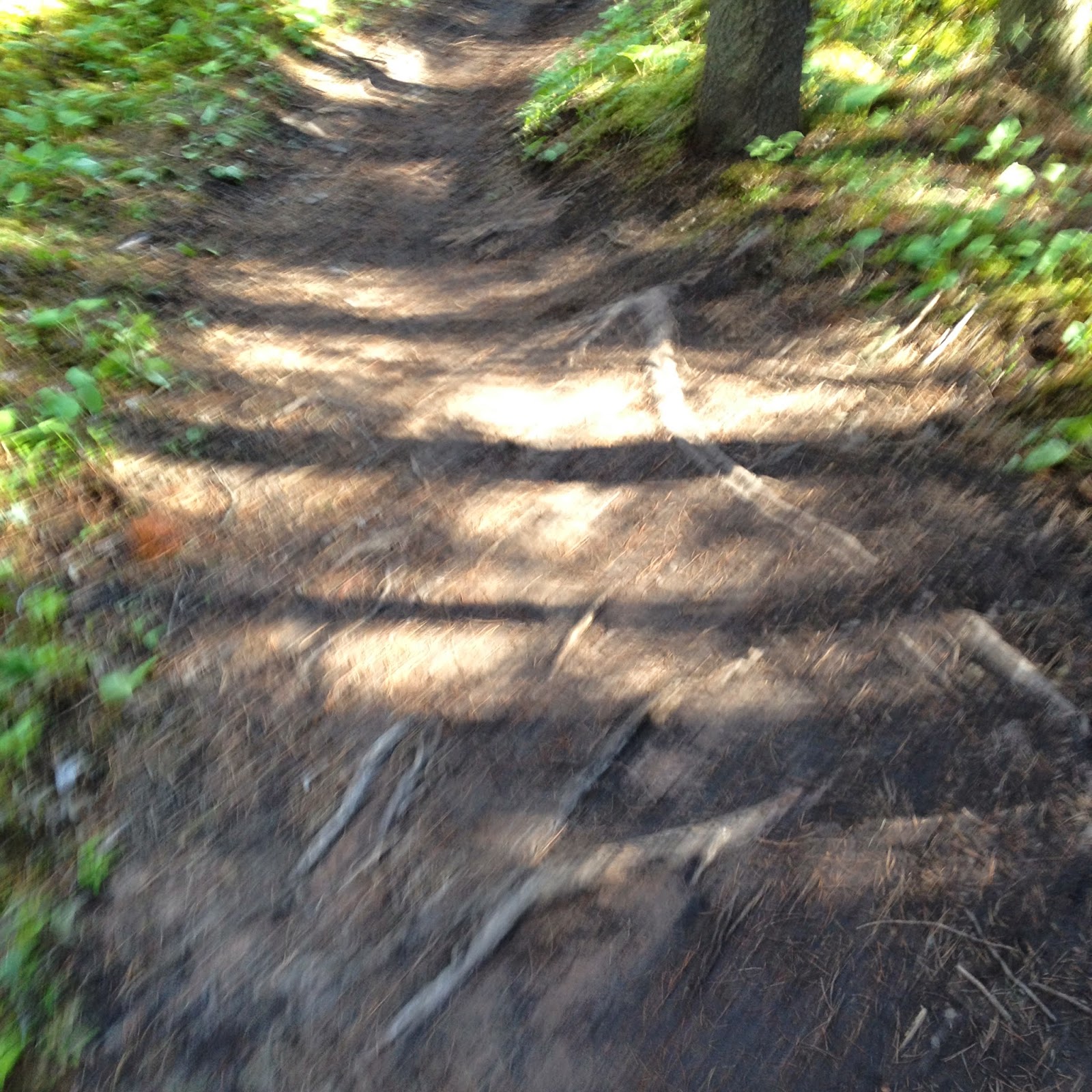 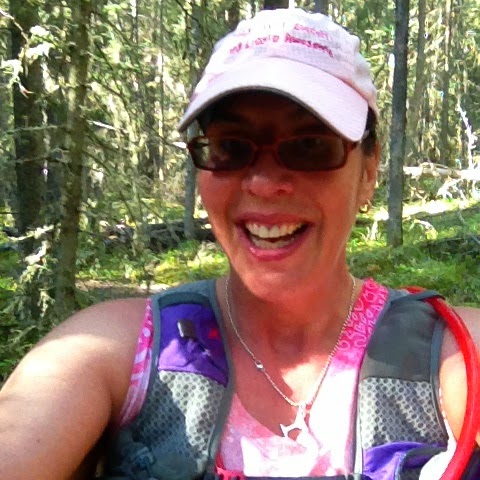 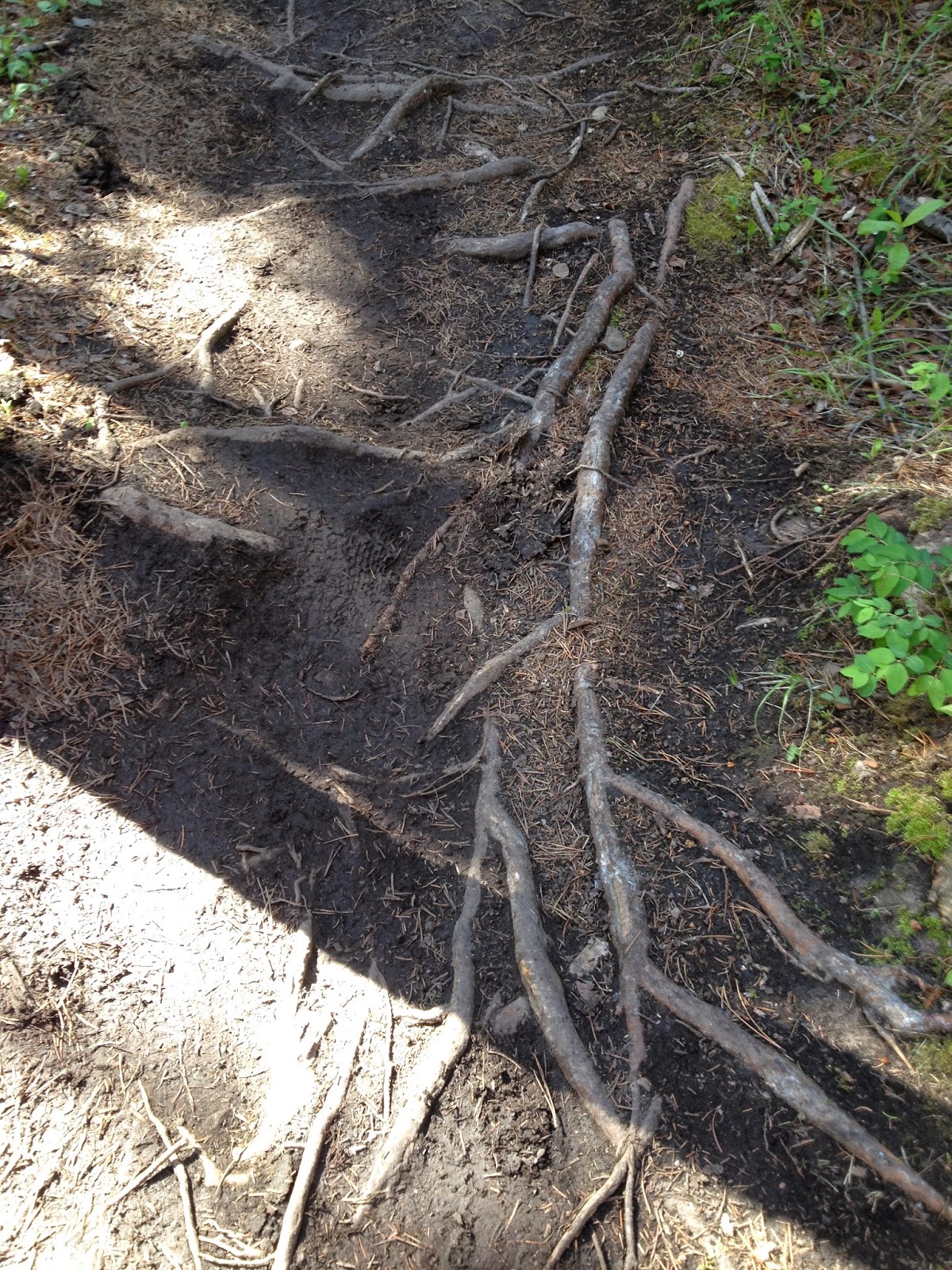 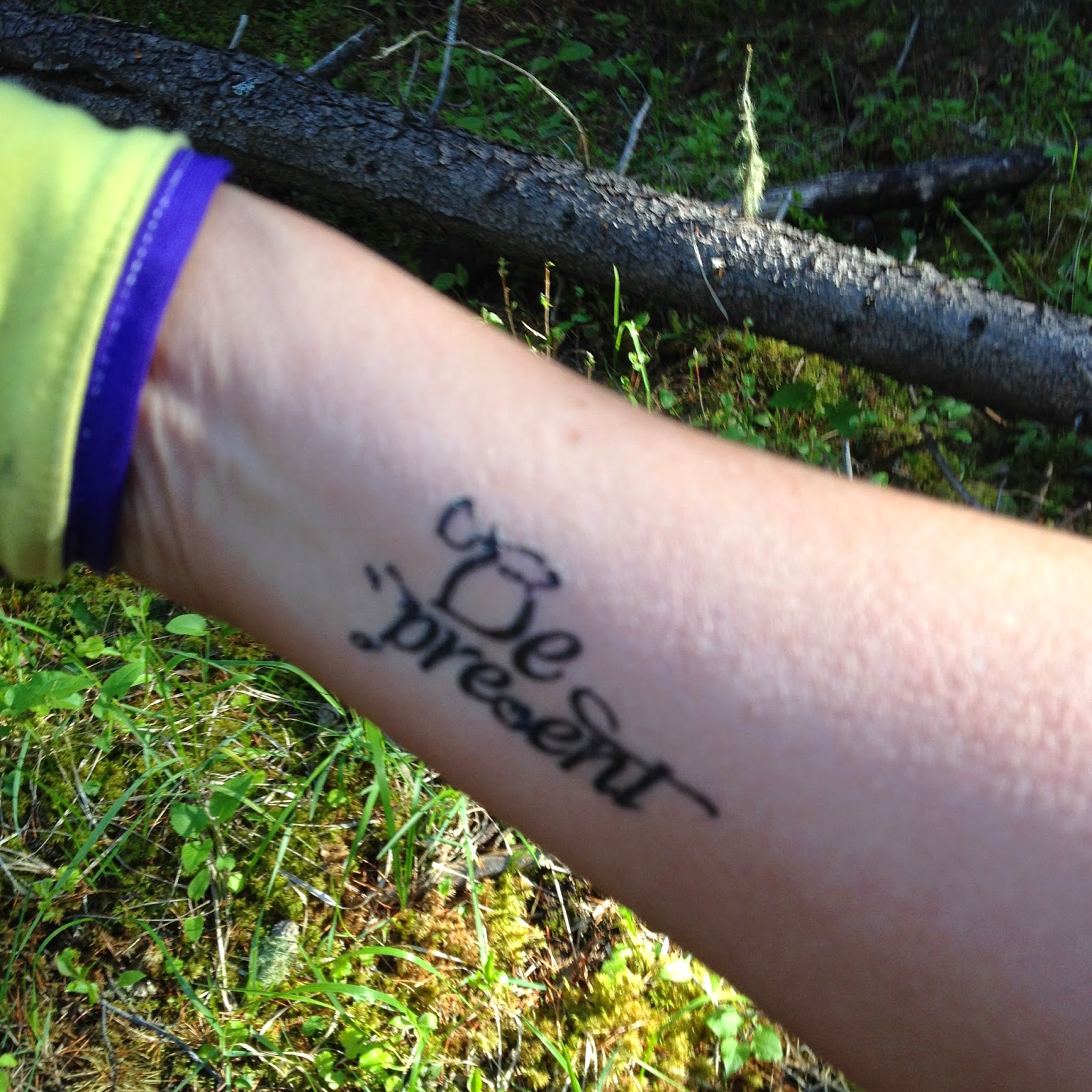 And I had to take a moment or two to calm down, and stay alert...I managed to trip a couple of times.
Only really fell twice though!  This was tough. But felt great. The smell was amazing, the air was fantastic and it was so so beautiful out! 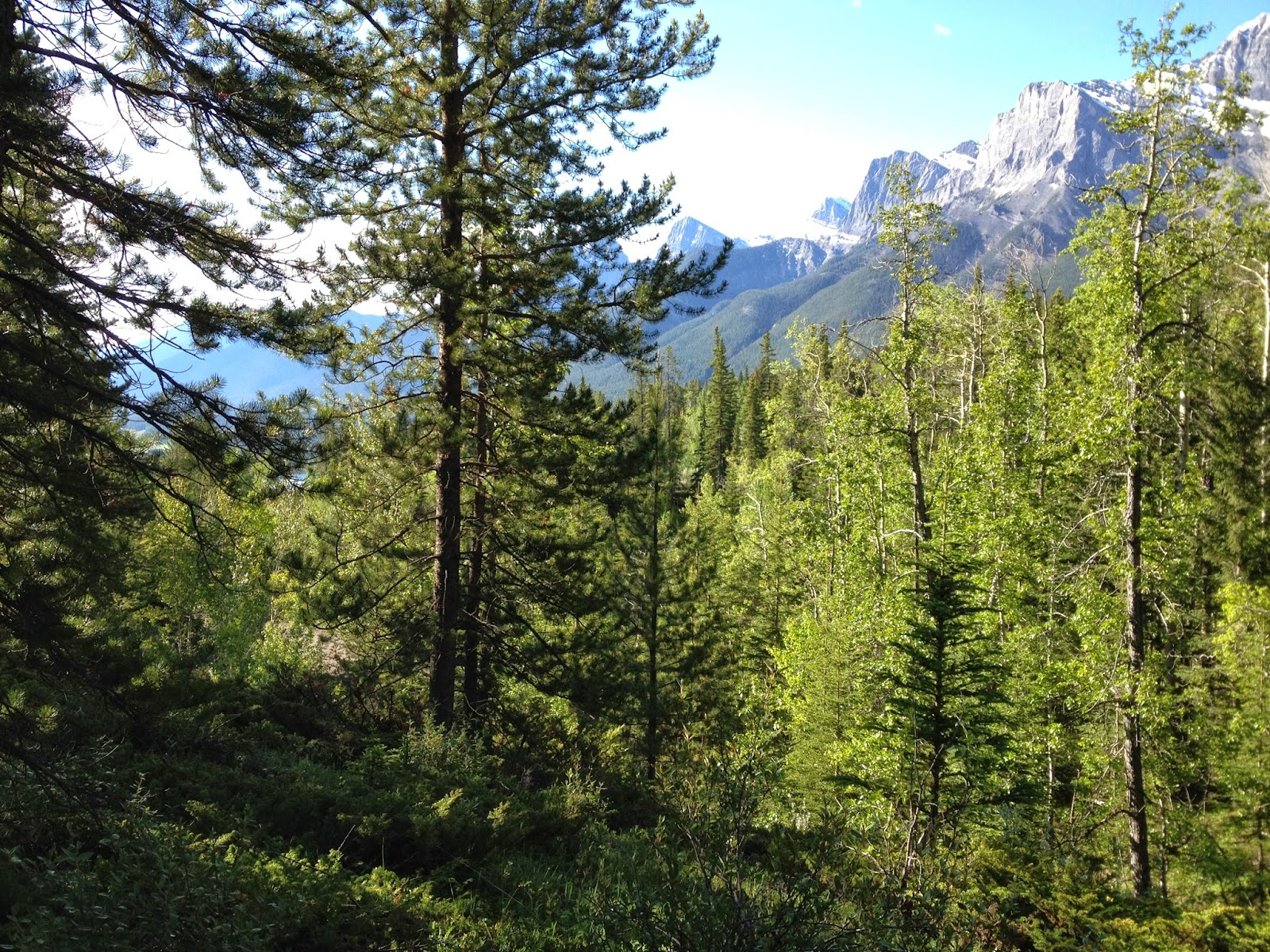 There were a couple times when the view was just so amazing one had to take a second to take it all in!
The second lap was going to be HARD! Especially as you knew where all the tough parts were! It was going mostly well, but the last 5 km were the really challenging part. Or was it 6km? When I finished my GPS said more than 27km...haha...it was tough those last few K, to be sure.

At one spot I walked and took a picture and gave myself a pep talk...You CAN! You are SO close!
And I just kept moving. 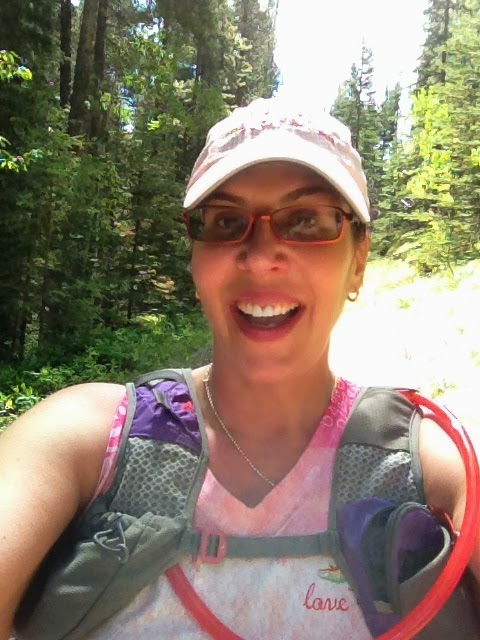 The trail is so so different than road. There is no music or tunes to turn up to get you in a groove. Music is way to distracting or dangerous on mountain trails. You need to listen! There are bears, cougars and quite a lot of folks on mountain bikes, too. And, since this race was loops, there were runners passing. We need to be aware of the surroundings, to be sure. Some things more scary than others!

I had less than 5km to go and I started pinging. It was Crystal wanting to know if I was done (oh how i WISH) but I knew I had a bit to go. I send one last text and put the phone away, puffed up with courage and got running. Less than 3km, 2km, then 1km...then the trees cleared and BAM...the finish was sooo close. My legs burned. They were heavy. But, I pushed and pushed and I could see the finish. then hear Crystal yelling at me. (she took these finish line shots!). And michelle an Susan were only a couple minutes ahead of me. All in all, we all KILLED IT! 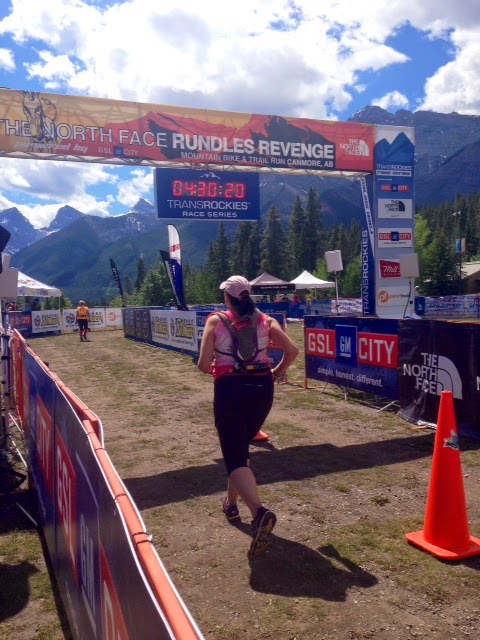 Honestly, I was elated! I hurt, my legs burned. I was soaking wet, filthy, covered in salty sweat and felt frigging awesome!!!

DONE!!!
I had a few gulps of Coke at the finish line, ate a few slices of watermelon. Chowed on some salty chips...and then... 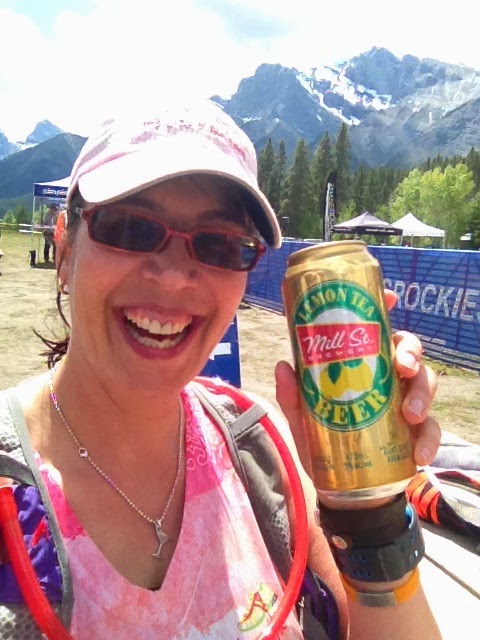 BEER!!!!
I do not drink beer...this was TASTY!!!!!
I finished 25km (did I say that GPS said well over 27km?? haha) in a slow 4:30. I had wanted to be under 4 hours, but I had not really run on these trails. I had been on some of the other hills out here, and they were not as ...erm...aggressive. Still...I got er done!!! As I finished there was one 50k-er finishing. And a few with another 12.5 km lap left to go! Everyone here is a BEAST!
AND I DID IT!
AND those climbs were insane.
If I was stronger on the trails I could have been faster sure...but I had an amazing time! The atmosphere was fantastic! The Transrockies Crew know how to throw a party!!! It really is awesome race and way to spend the day. Who doesn't love a sunny day, trail run, BBQ and laugh?

And check my race pics out! I normally HATE race pics...but these well the view is spectacular! I might look like a rock star, but they  do showcase the amazing view! 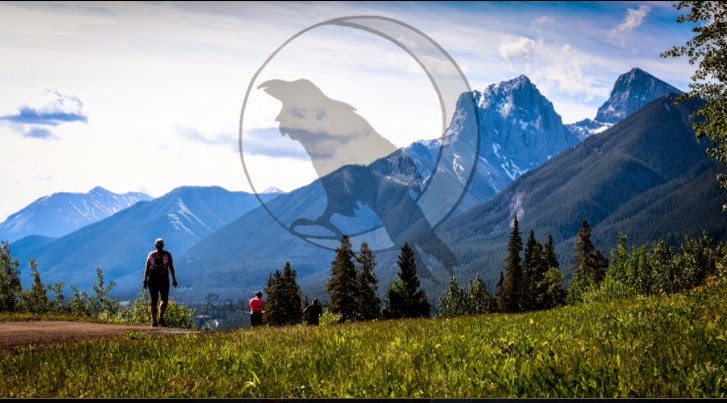 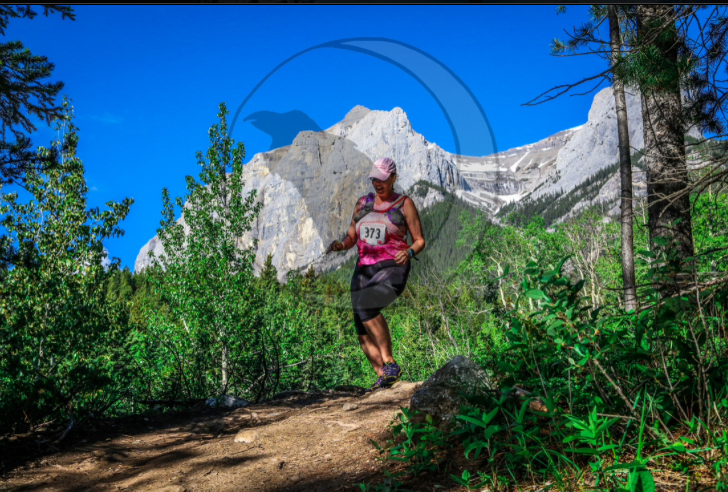 And I can't wait to get back out to the trails again!!! whooohoo!

Do you run trail?
Have you done a trail race?
What is the best (or scariest) thing you've seen on the trail?

Do your feet get this dirty? 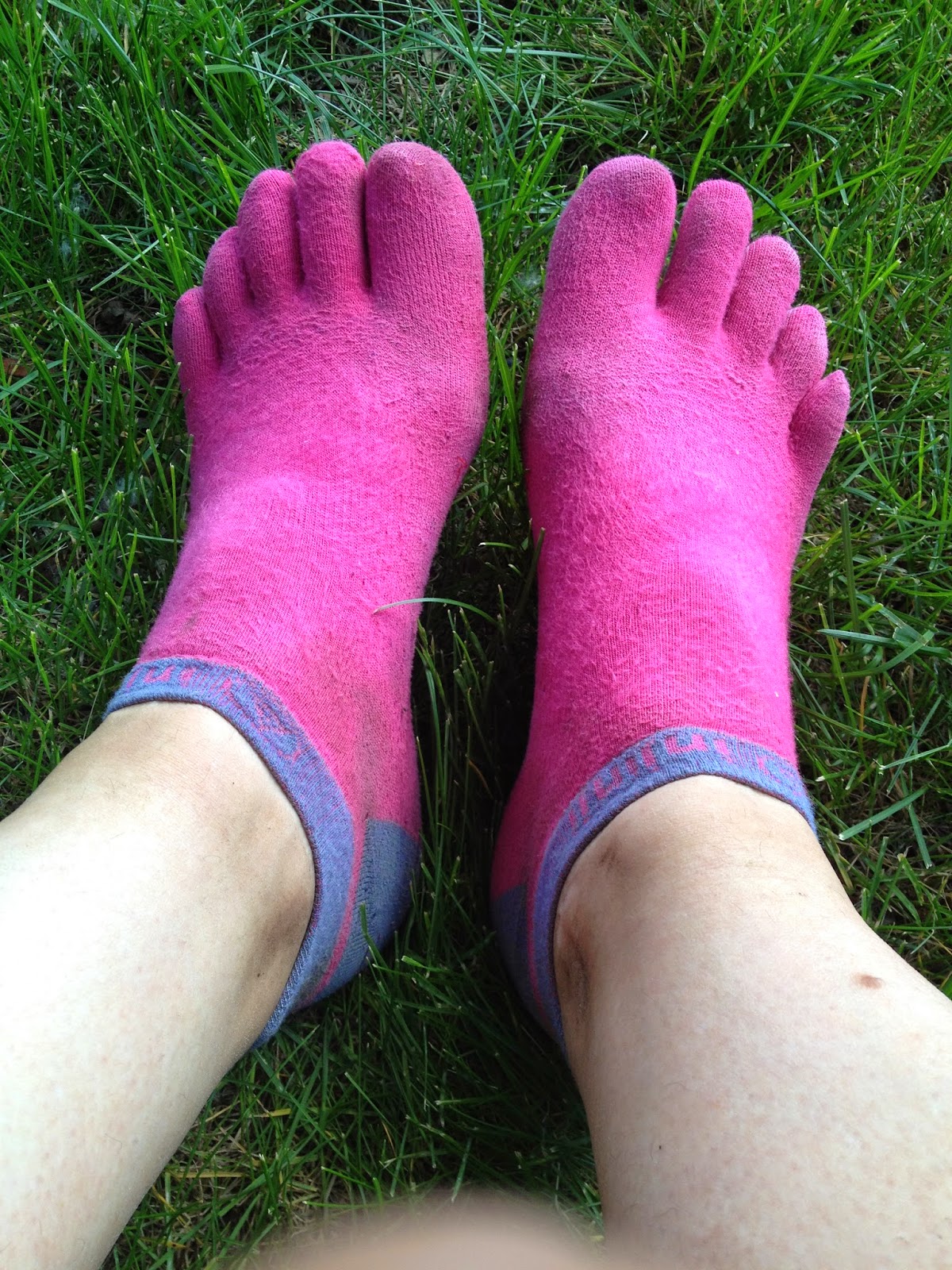 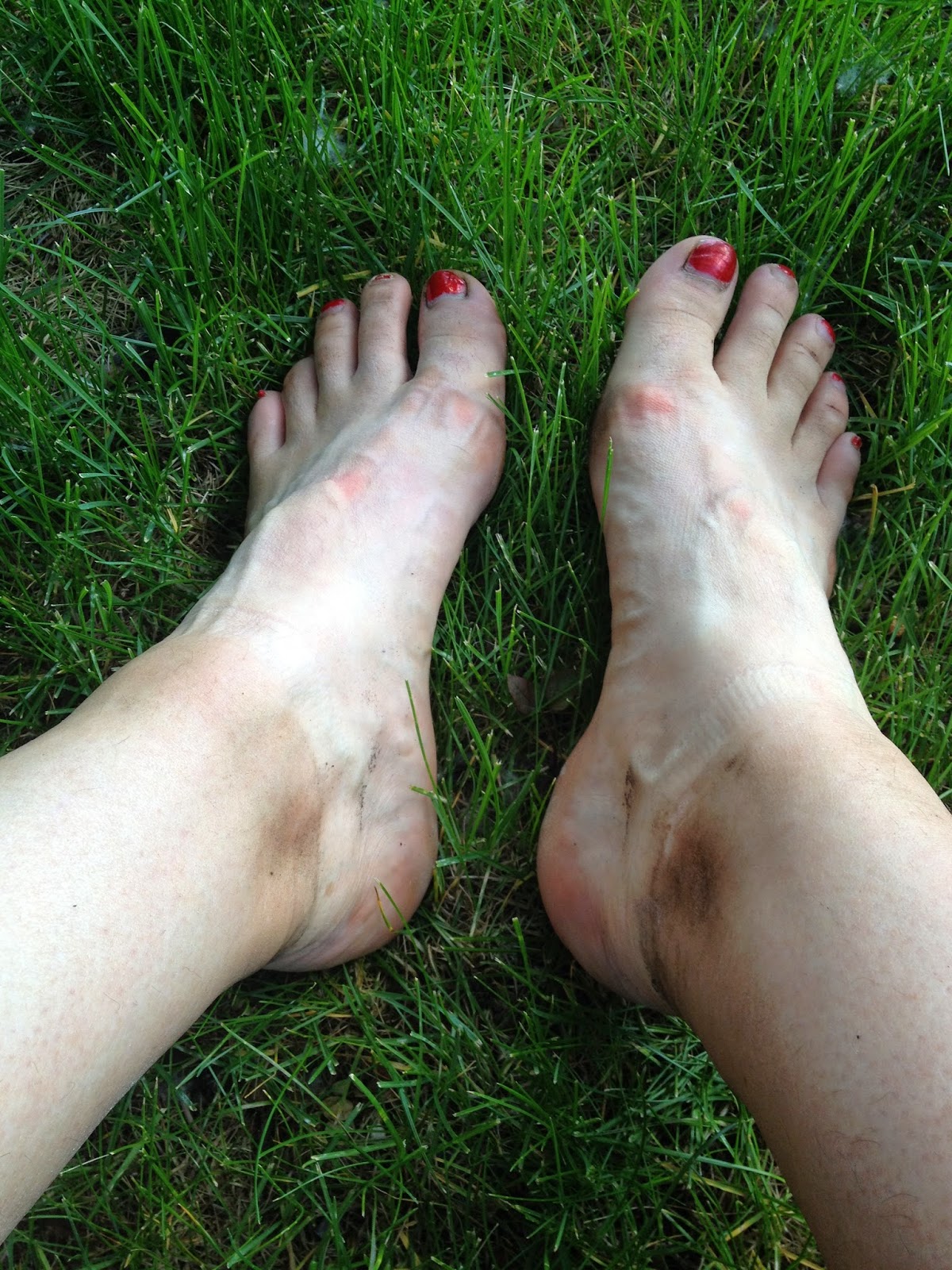