Sunday morning I woke up super excited! Not because I had a long run (noooo I got that done on Saturday)...I was super stoked for the WOW SuperHero 5/10 km Run! And then I lied in bed an listened...and then looked out the window.

But wait.....I have a SUPERHERO costume to don! There will be runners who NEED me at the 5km turnaround! YESSSS...But most of all, I will suffer through that sleety snow alongside another volunteer....BatMommy (aka Cori)! So it cannot be that bad! GET UP GETUPGETUUUUUUUP!!!! Don that Sparkle and hit the trails! 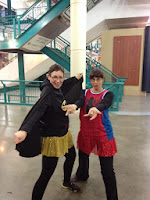 I really would have LOVED to run this race, but it just didn't work in my schedule...so when Cori suggested being a course marshal I had to say YES!!!

Cori and I met at Eau Claire, the start of the race to get the deets, make posters, and get coffee. Posters were nixed due to the VERY wet weather. We then decided with the nasty wind and biting cold, it was not the smartest idea to run the 5km to the turnaround point where we would be working for the next hour.

We would be WAY too cold ... so we drove and parked nearby. And by the time we walked up the road to the turnaround spot 5 minutes away, our feet were SOAKED! But the view was sure pretty! 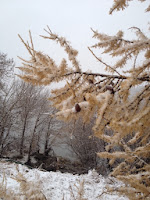 Then we decided to amuse ourselves until we got a runner.... 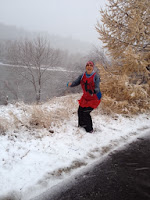 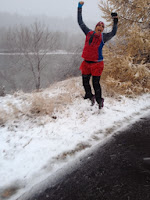 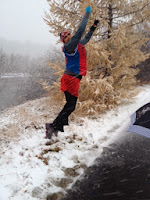 Clearly it took a few tries til we got the jump shot "perfected"! 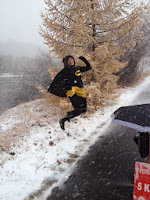 The race started at 10...before we knew it we were insanely cheering as a runner approached. HA! She ran on by as she wasn't in the race. But the next runner was. She was on FIRE! Then we got a few more runners. In a real 'go grl" moment....there were 3 or 4 women before a man came along! There were only about 30 10km runners. So we still had plenty to come.

There was a lot of jumping, cheering and Hi-5ing ALL pathway runners. Even those who exclaimed, "Oh no! We aren't in your race!" To which we replied, "You are running today, you deserve cheers!!"

We had cars honking an waving at us! I expect it was a spectacle.
Actually I had a couple messages when I got home that some people had seen us cheering out on Memorial Drive and 29th Street and RECOGNIZED us from their cars.
Awesome. We did our job then!

Then a volunteer came riding up. We can't be one we said to each other!!! Still plenty to come.... 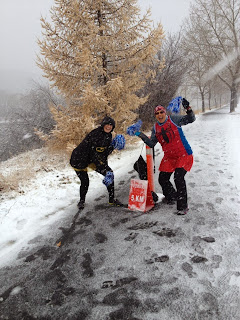 Greeting runners as they approached the turnaround on the pathway!

By the time the last cyclist came to tell us it was time to head back, we were freezing!
But not to cold to snap a couple more last minute shots... 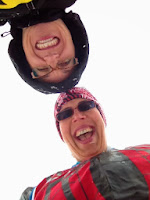 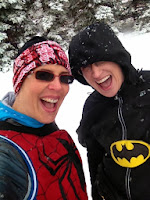 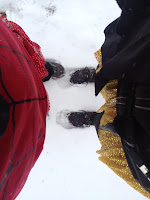 So we headed back to the car then the finish reception area for coffee, treats and thawing out! It really was a hoot. It was my first gig as a course marshal! I loved it! Can't wait for it next year....ooooo there will be a good costume!

Ever dressed as a superhero? For a run? Or just in everday wear?
Who is your favourite superhero?
Batman or Robin?
Best villain?
Supergirl or Wonderwoman?