so.... I've been nose breathing, and visualizing. And i am dead nervous.

But i wake up early Saturday morning. The day before the BIG race. And I am off to shake it off with a short run with the Running Room. And who is leading the run? Frank Shorter. An Olympic GOLD medallist from the 1972 games. And a Silver Medallist from the 1976 Games. A man who's victory is credited with igniting a running craze in the America. So yeh. He is kinda a big deal.

Anyhoo. This morning is part of of a relaxation thingy for me. I go to run to chill out and get ready for the big day tomoz.

Let's be honest. I was initially going out cause John Stanton was gonna be three. He is the OWNER of the Running Room. But he is not here. He's in Ottawa at their marathon. But Frank is here. Shall i divulge to you, dear reader, that I do not know him. But hey, if he is a pal of John's.....

So i get up and go (even though this will mean for certain I will be over an hour late for work in the morning).

And the first person (well dog) I see is Harvey the Hound. The Calgary Flames (NHL) Mascot. 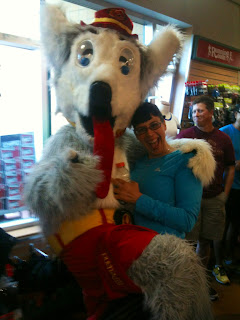 Let's be honest. He's a bit of a leg humper. But he gets us all in the spirit of the fun of the run. And all the kiddies there are THRILLED to see him.

As we settle in to wait for some words from this Olympian. I see him enter the store. I am in awe of him. I stare at his thin, magnificent muscular legs. My god he is small. He has a presence. 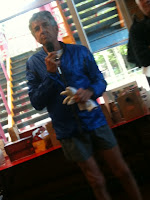 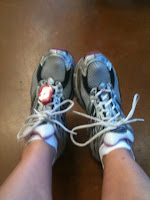 
And then I stare at my legs. and i pray...please get me thru 42.2 tomorrow. You know you can do it.
And then I settle down. and listen to him talk. He talks about racing, running, about his first time in Calgary. And for the first time in a week, I forget i have a marathon to run.

I think about him, his achievements and really how amazing he is. And what a great speaker.

And then i have a couple minutes vofroe the run...so i ask him for a photo. He is, of course, graccious. ANd then he gives me some last minute marathon advice. BREATHE. ENJOY. Just RUN. 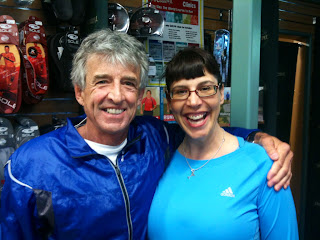 And so we run. 3 km. in about 15-17 minutes. I don't usually run that fast, actually. It feels great. I race get dressed for work and then make a hasty exit.

But not before I am quickly introduced to a young Calgarian named Bernard Onsare. He's tiny. Unassuming. Oh. And he just won 2nd place in the Vancouver marathon last weekend. oooooooooooooo. well he has this brilliant smile on his face, and is kind and tells me how pleased he is to meet one of the Running Room Instructors. Then he finds out its my first marathon. And he proceeds to spend a few more minutes telling me to relish the race. To enjoy it. To love it. To just run. There will never be another first marathon he says. Only this one. The next one worry about time. This one, is just about doing. Jsut finish. The next one, you will know what you need to do...

I am pretty impressed with this young man. And totally flattered that he says he will look for me at the race. PULEEEEEEEESE. This dude is an ELITE. He is at the front of the pack. Um....I am at the the 5 hour mark, people. But still. Flattery will get you EVERYWHERE.

(jsut a fyi...
i'm kinda sad i never took a pic, esp when that young man laid down
a 2:22 to rip the course a new record the following morning!!)

Still what a START to my day. It sticks with me all day, till i get home and start laying out my gear.

OK. Gotta gather my race shiz.....its ready. So Am I. BRING IT!
I got my yurbuds, my SparkleSkirt, my One More Mile Shirt, my SpiBelt, my CEP sox, my FuelBelt, and a lulu sunblocker top too! ANd of course my Brooks Glycerin 9's. 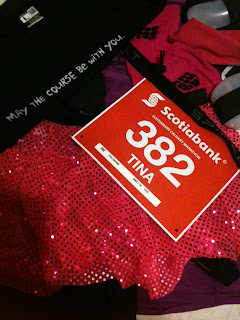