I ha been planning on doing the Grizzly Half Ultra for a while -- ever since I finished Rundles Revenge 25km race. I knew a few others were keen so I went to sign up. Then a pal of mine asked if I would do it as a team. I said nah, I wanted to go it alone. She was persistent, but wanting to use it as an opportunity to try trail running again. So I finally agreed if I did the first two legs and she did the third. Tara was good with that since she rarely runs longer distances, and hasn't ever done more than 7km on a trail.

So it was decided. I would do the first two legs - 12km and 7km and she would finish us off with the 5.7km leg. Sounds pretty easy. Nice and short. Yeh. Check out the Griz Legs and see for yourself. Hard as hell and so much fun! Now why a Grizz Half? Because it is HALF of the distance of the Grizzly Ultra in October! 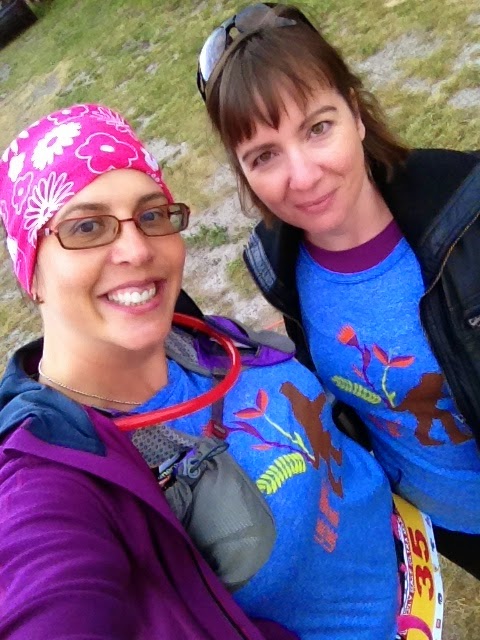 Tara and I got to the race and I think I was more excited than she was...but she had a few hours before she had to start. Maybe she just needed a nap! 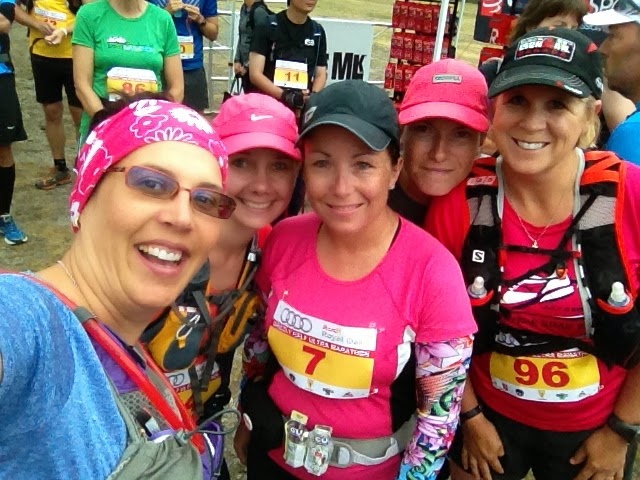 Michelle, Sue and I and a few of Sue's pals were all ready to start!!
It was a great way to try out the Grizz course and run the trails. I knew Sue and her friends were doing the Griz as a team, so this was a way to see if maybe I could find a team too! 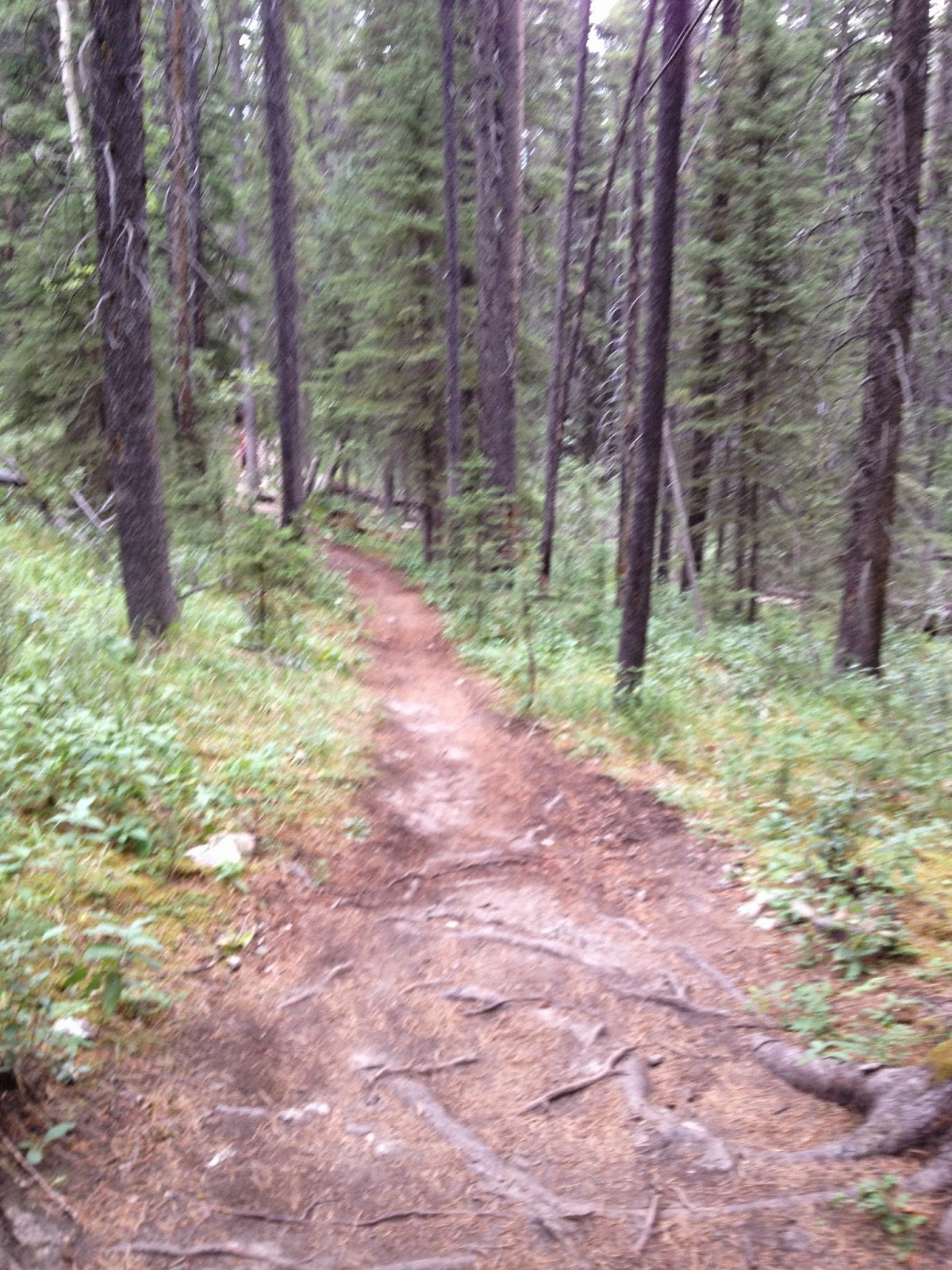 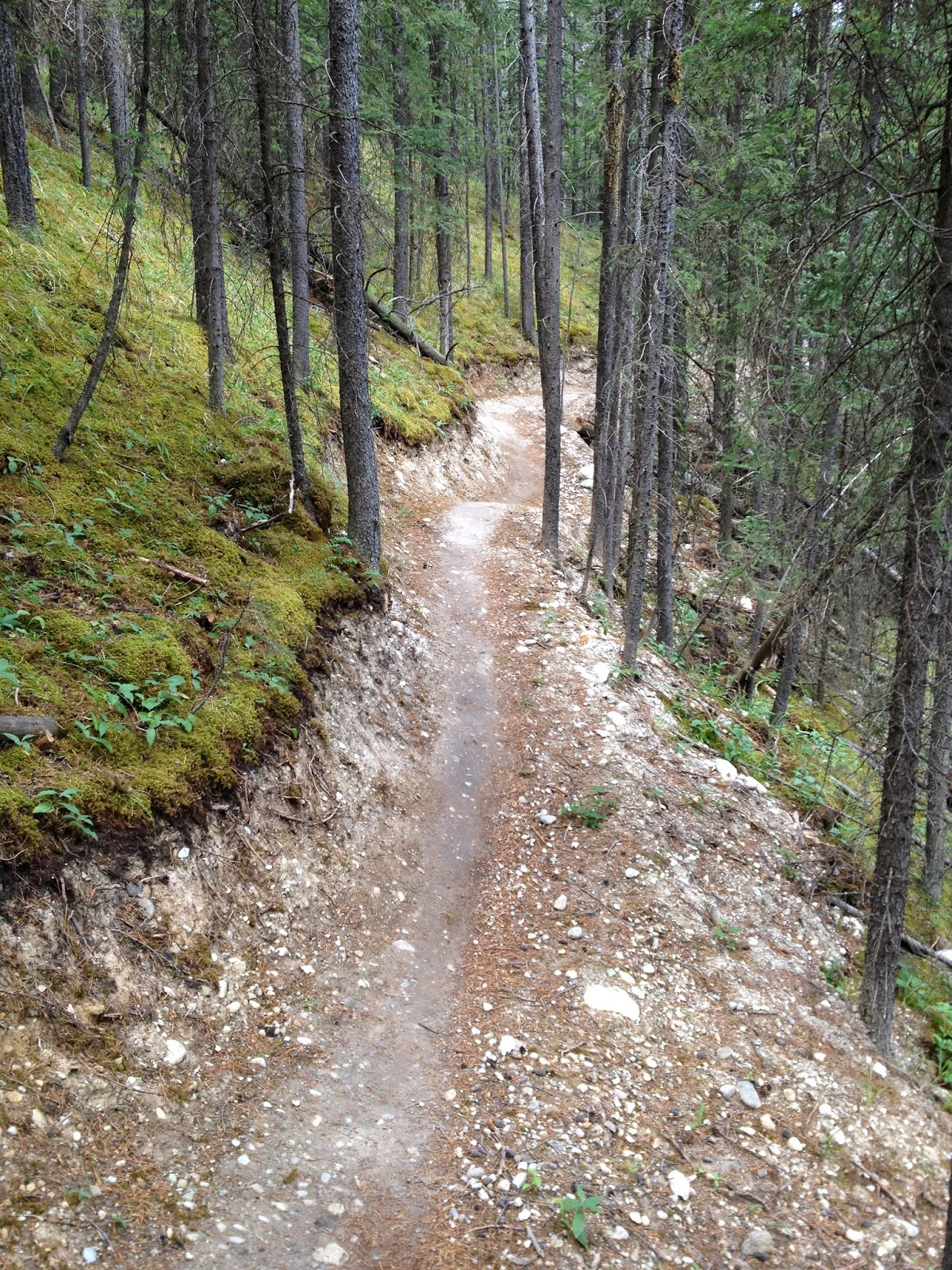 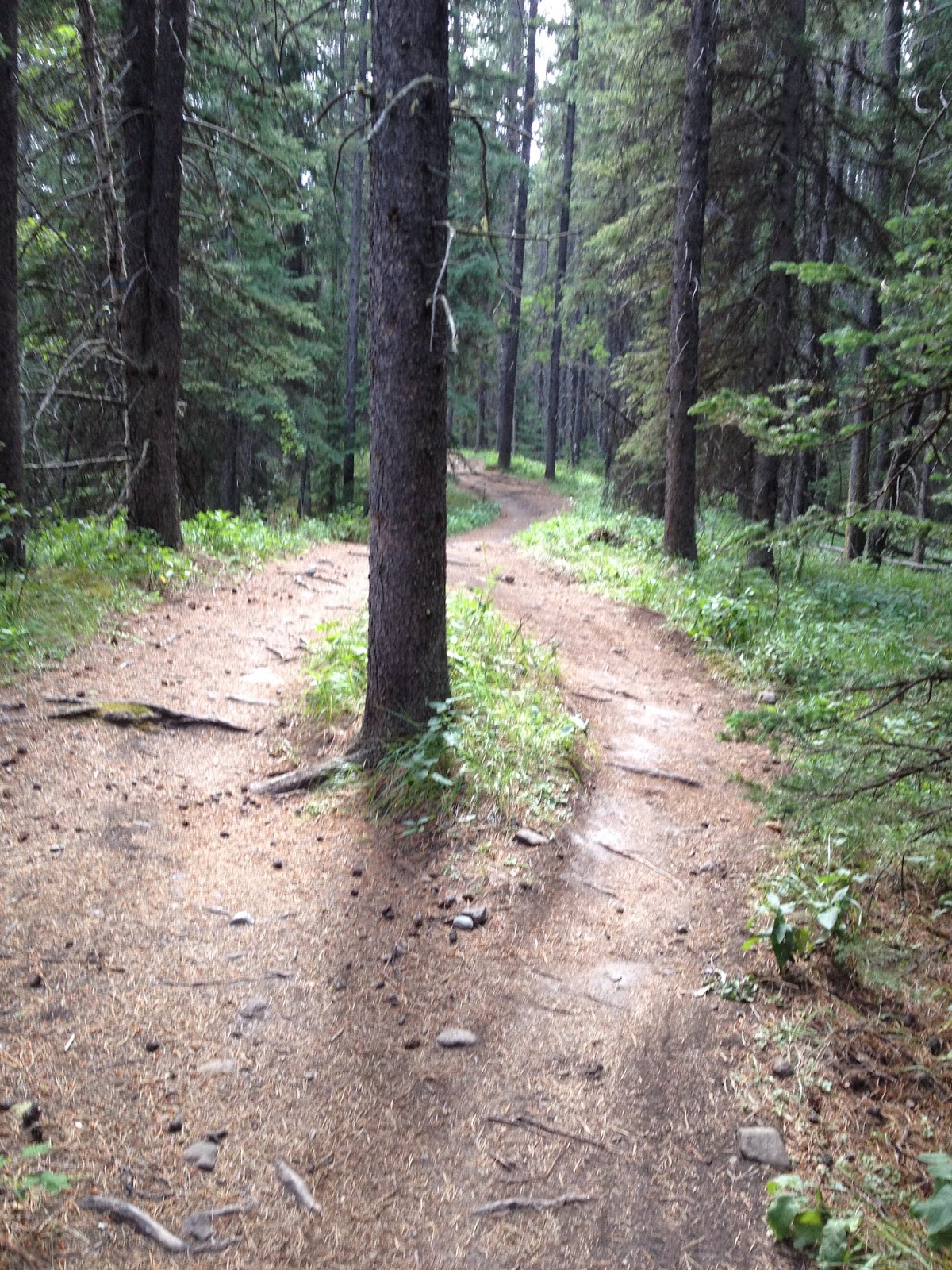 The trails were awesome. Mostly single track, all pretty technical. All fabulously fun.
Too bad I never got pics of the bear poop on the trails! 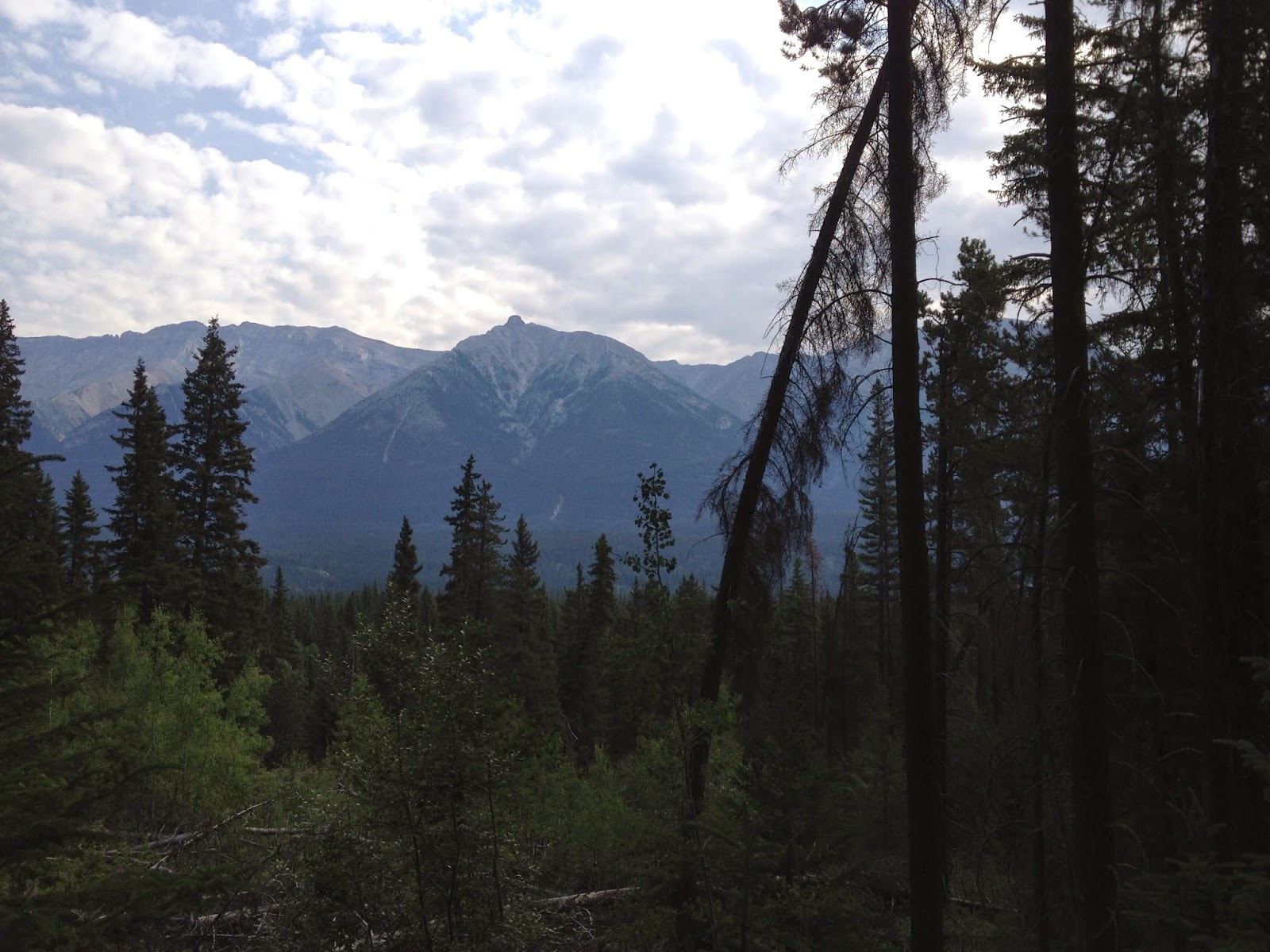 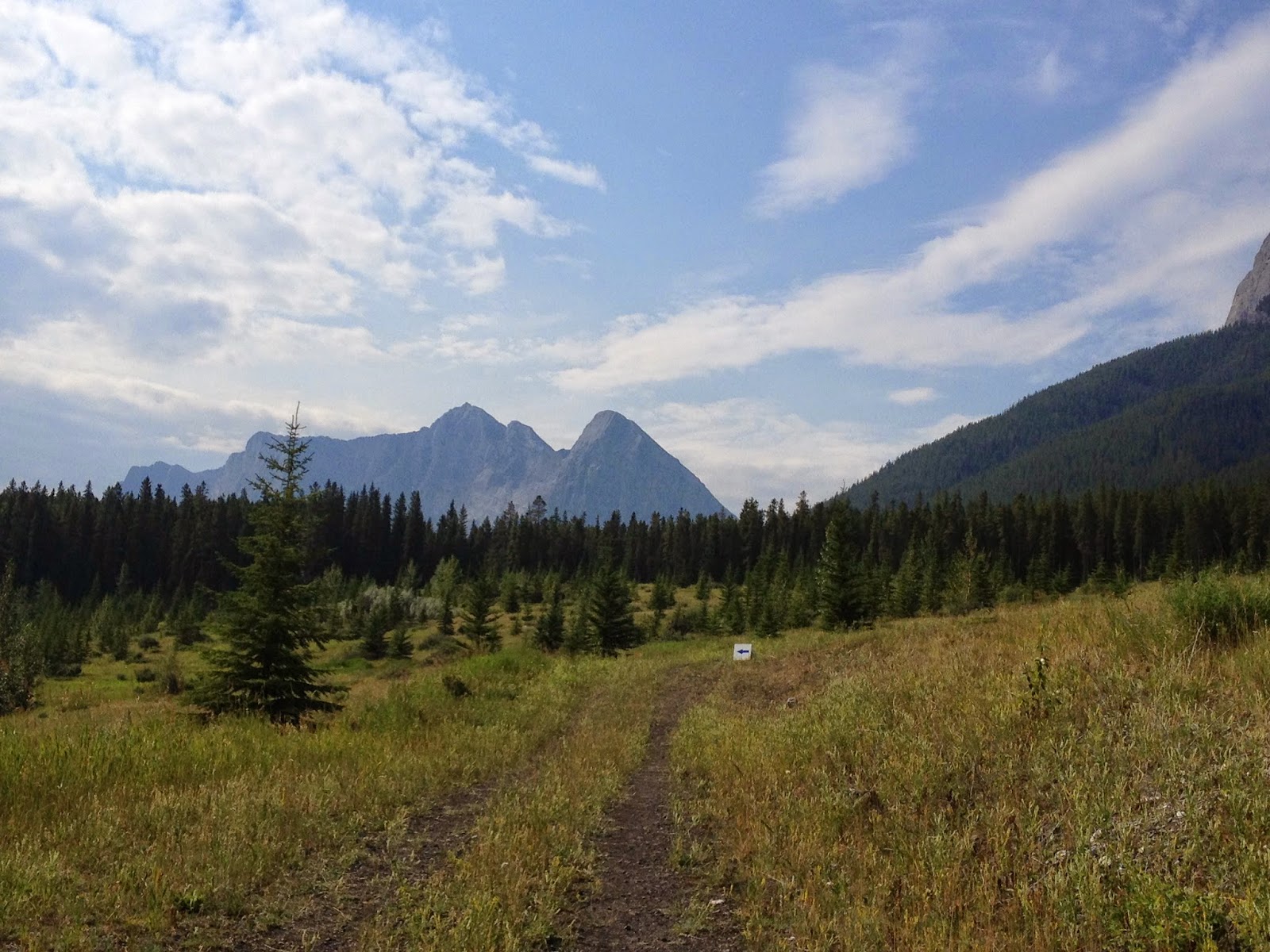 And the views were freaking spectacular! 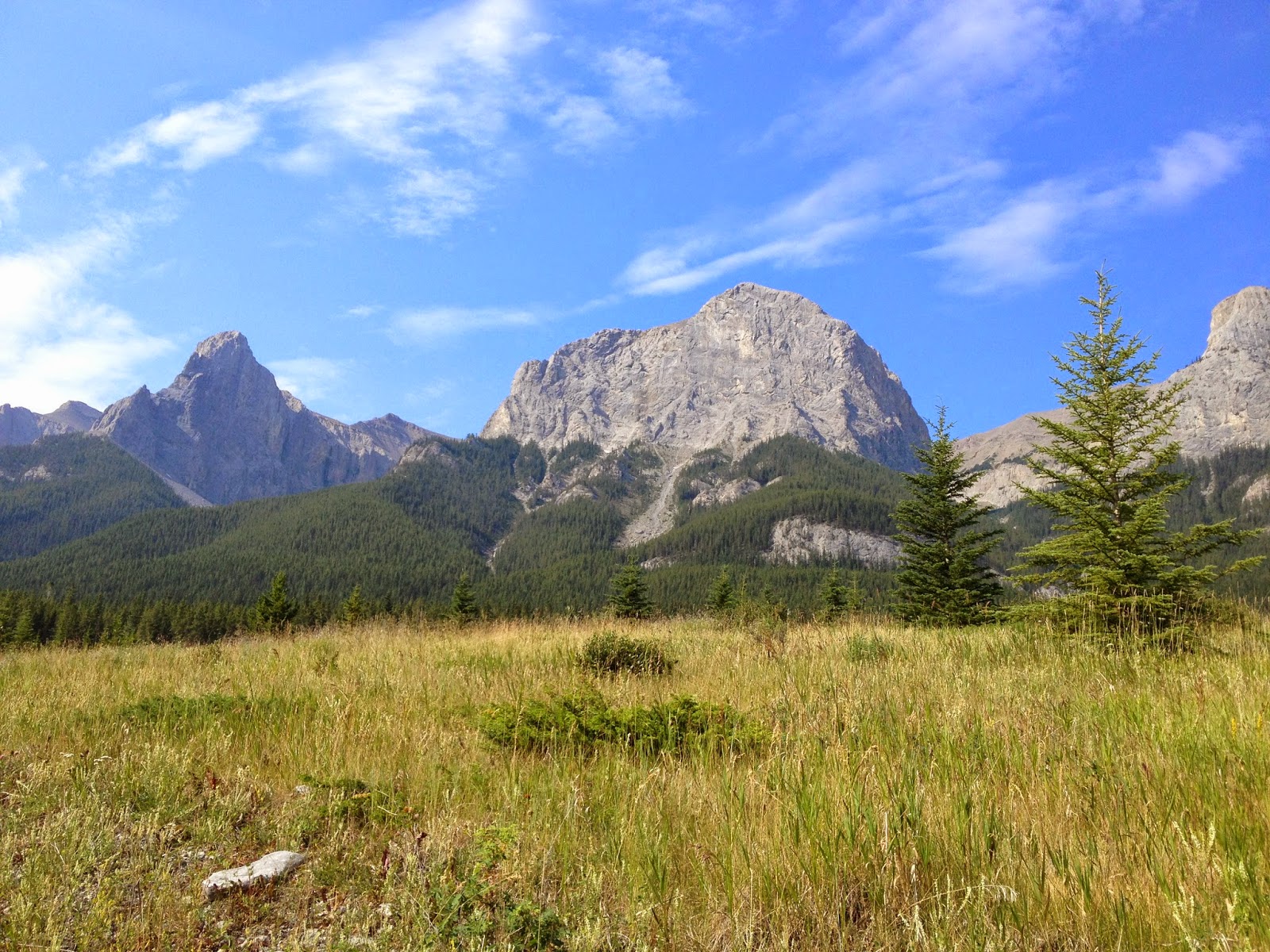 The first two legs were hard. 12km on the trail pretty much took twice the time as a run on the road. There was steep climbs and scrambling up some mountain paths. Us gals pretty much stuck together for the most of it. Part of it was there were a few in the group not used to trail. Part of it was the bear sightings. Not by us, but on the paths in the days and hours before the race. We used it as a great training run. It was a LOT of fun. We went thru the timing chute at the 12k mark and stopped at the food and hydration station. And off we went for the next leg.

Which was a LOT of climbing. it was pretty much 50% of incline. Translation: a fair bit of cursing. But once we got to the top and started the descent. Which was awesome, but my legs sure felt it! I got thru the the leg and was kinda sad that Iwasn't doing the last few kilometres. But I  was happy to see Tara off too! 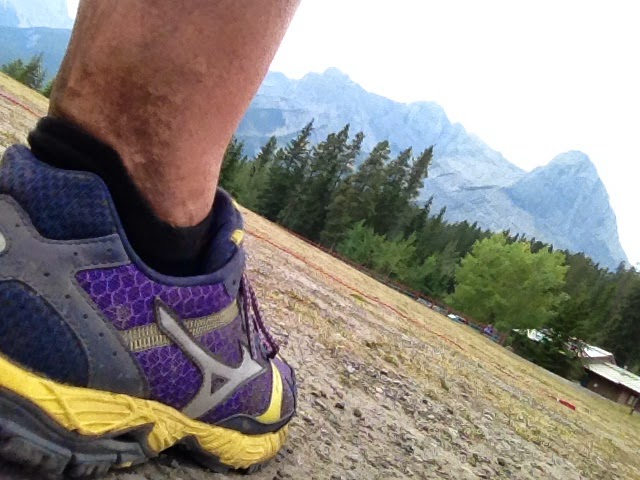 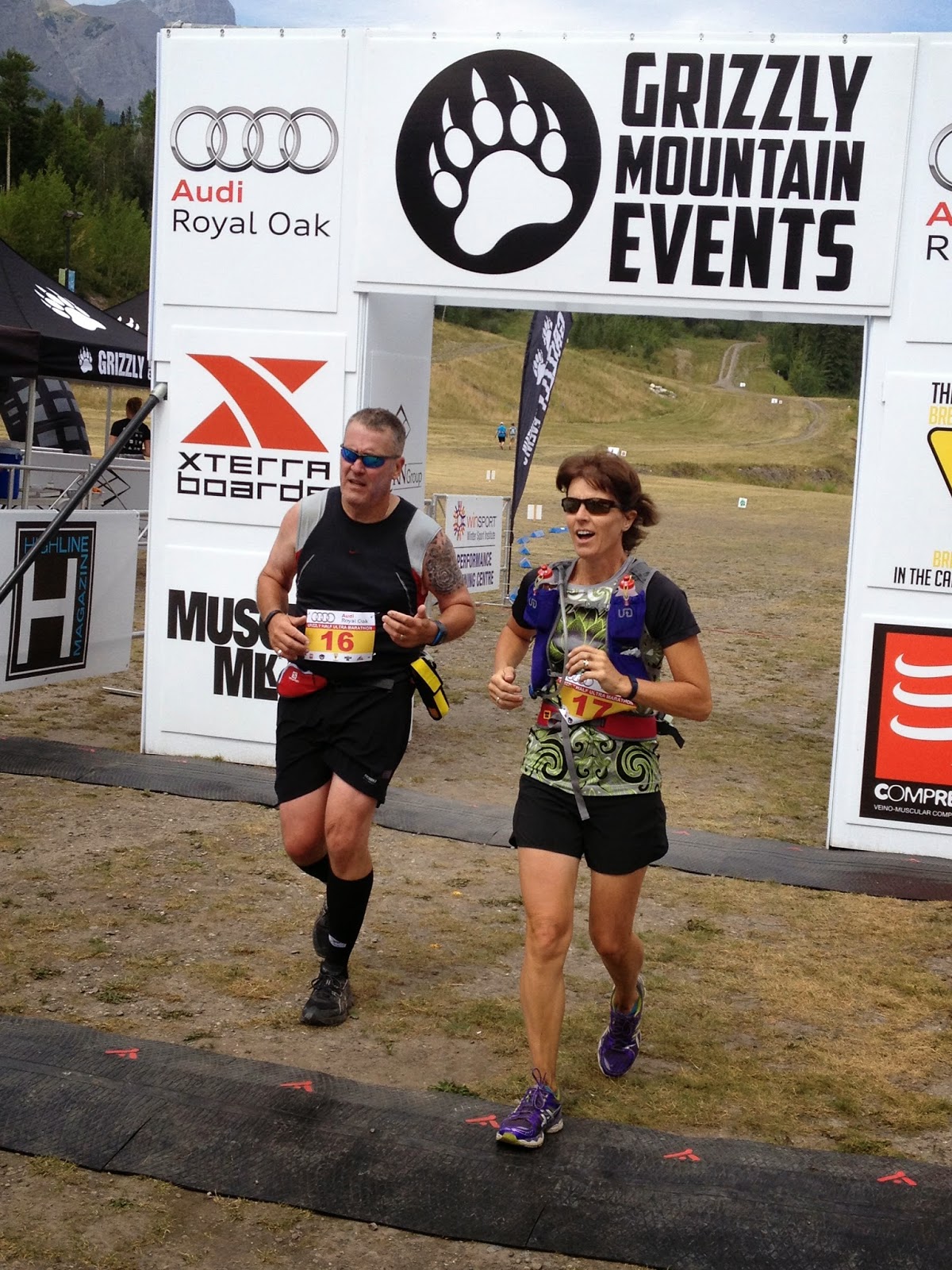 As I waited for the gals to finish, Rachel and her husband Mark came thru the finish! Looking marvellous!


It took about 47 minutes for Tara to finish the 5.6km. It's humbling running trails...Tara can run a 5k in 27 mins generally. So the ass kick that trails deliver is sometimes a surprize. Yet it feels so good! 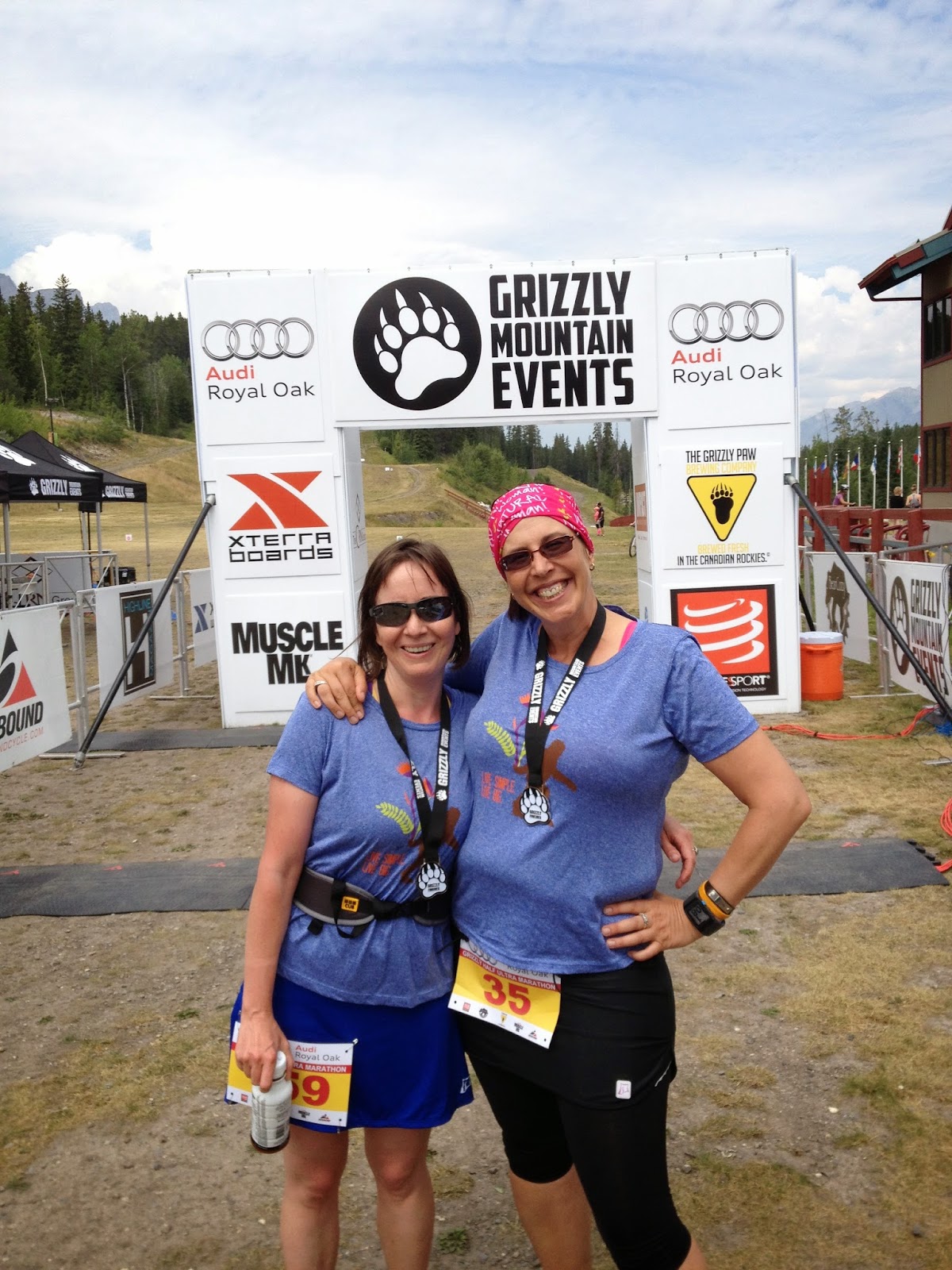 We were pretty chuffed at the finish! 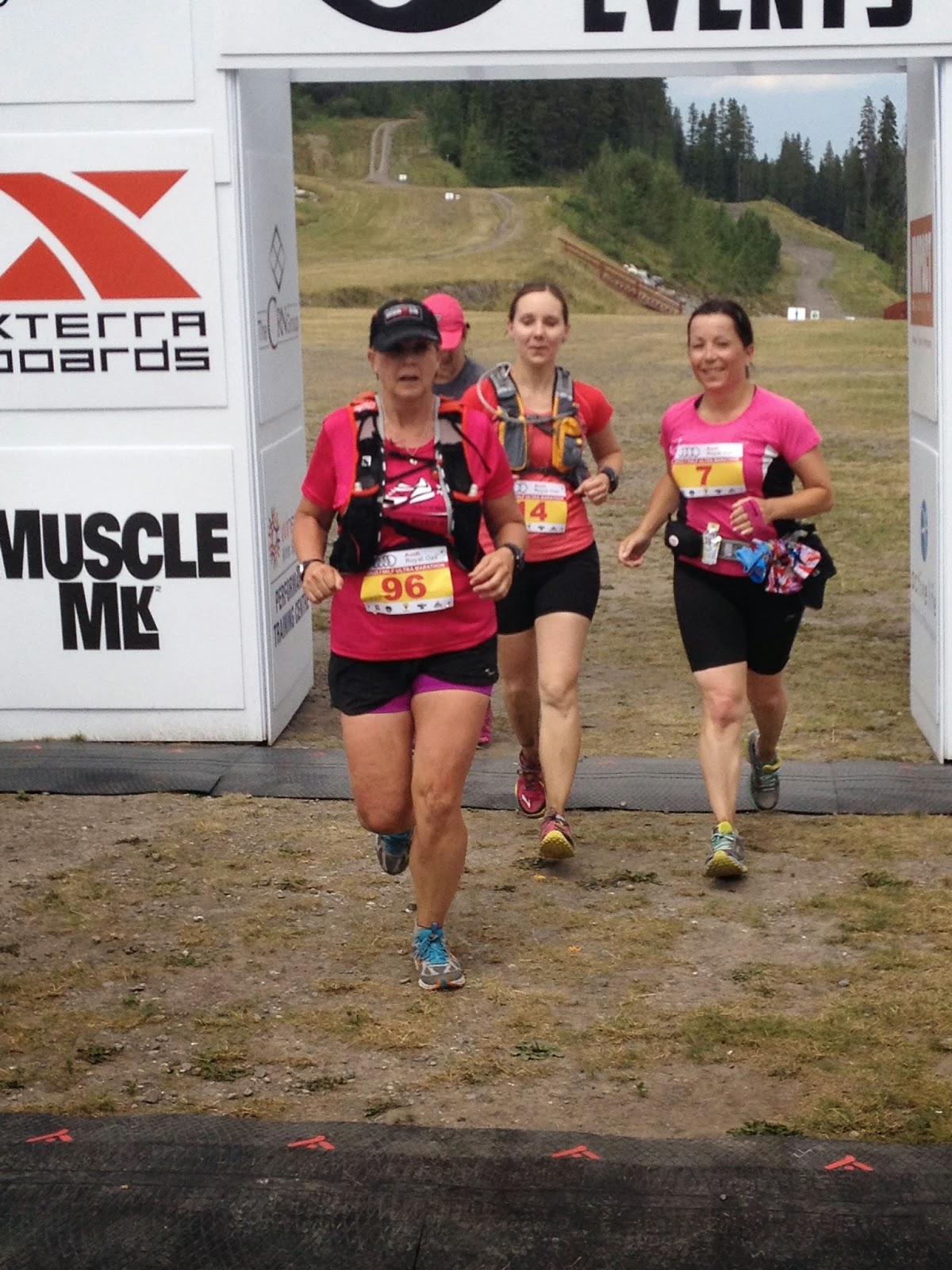 Another 10 mins or so and the gals finished! Great smiles all around!
Tara even remarked saying you gals have so much fun...maybe I need to do this more. 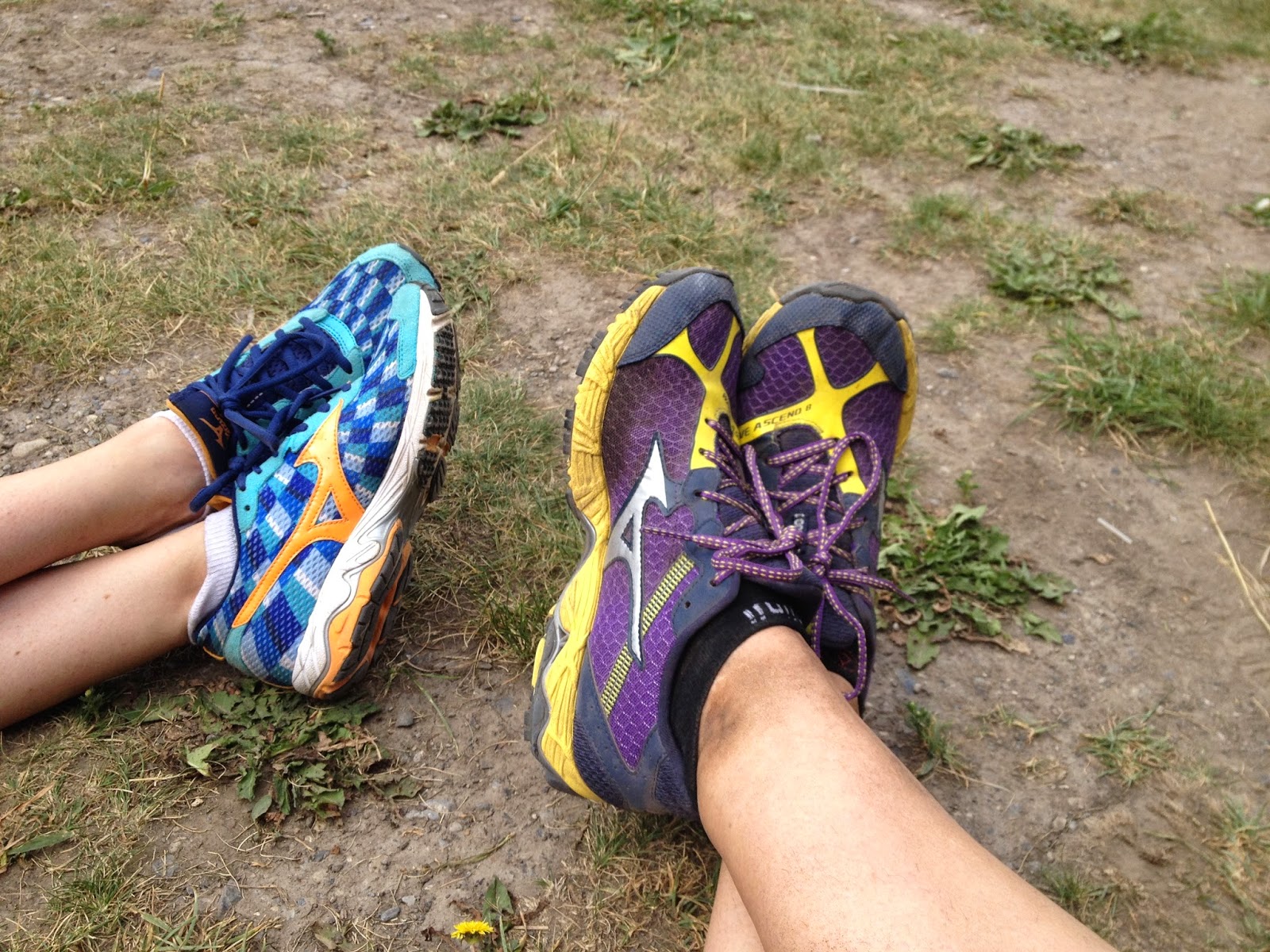 We sat around and enjoyed some treats! 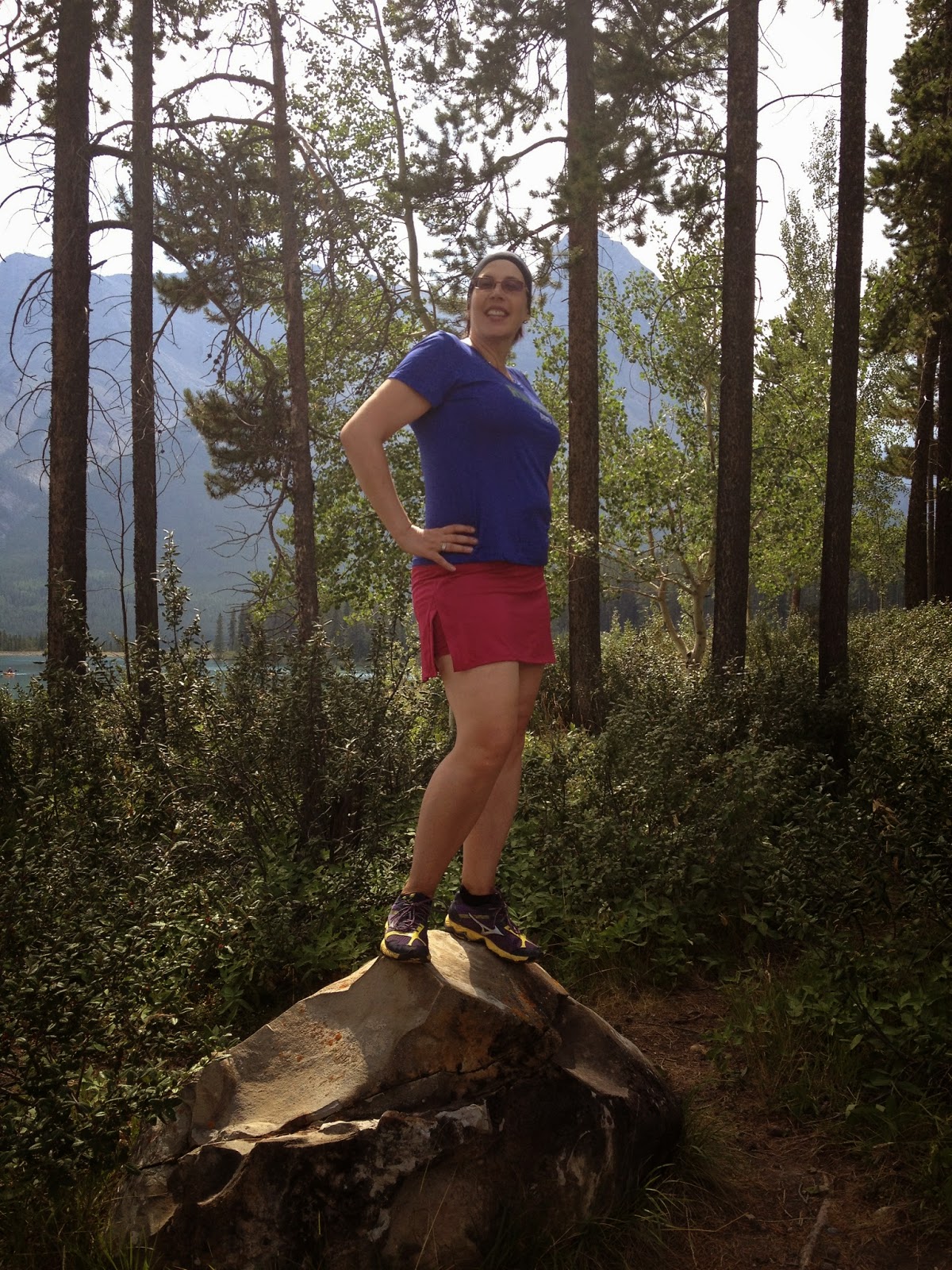 And  - pretty much -  enjoyed the sights while looking like rockstars! 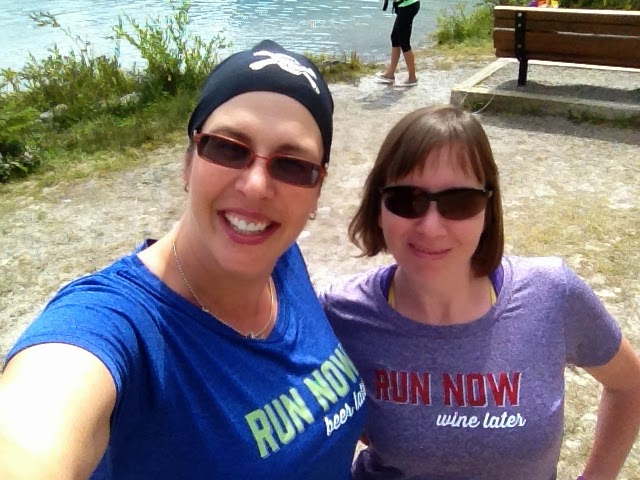 And finished the run with a cider!! 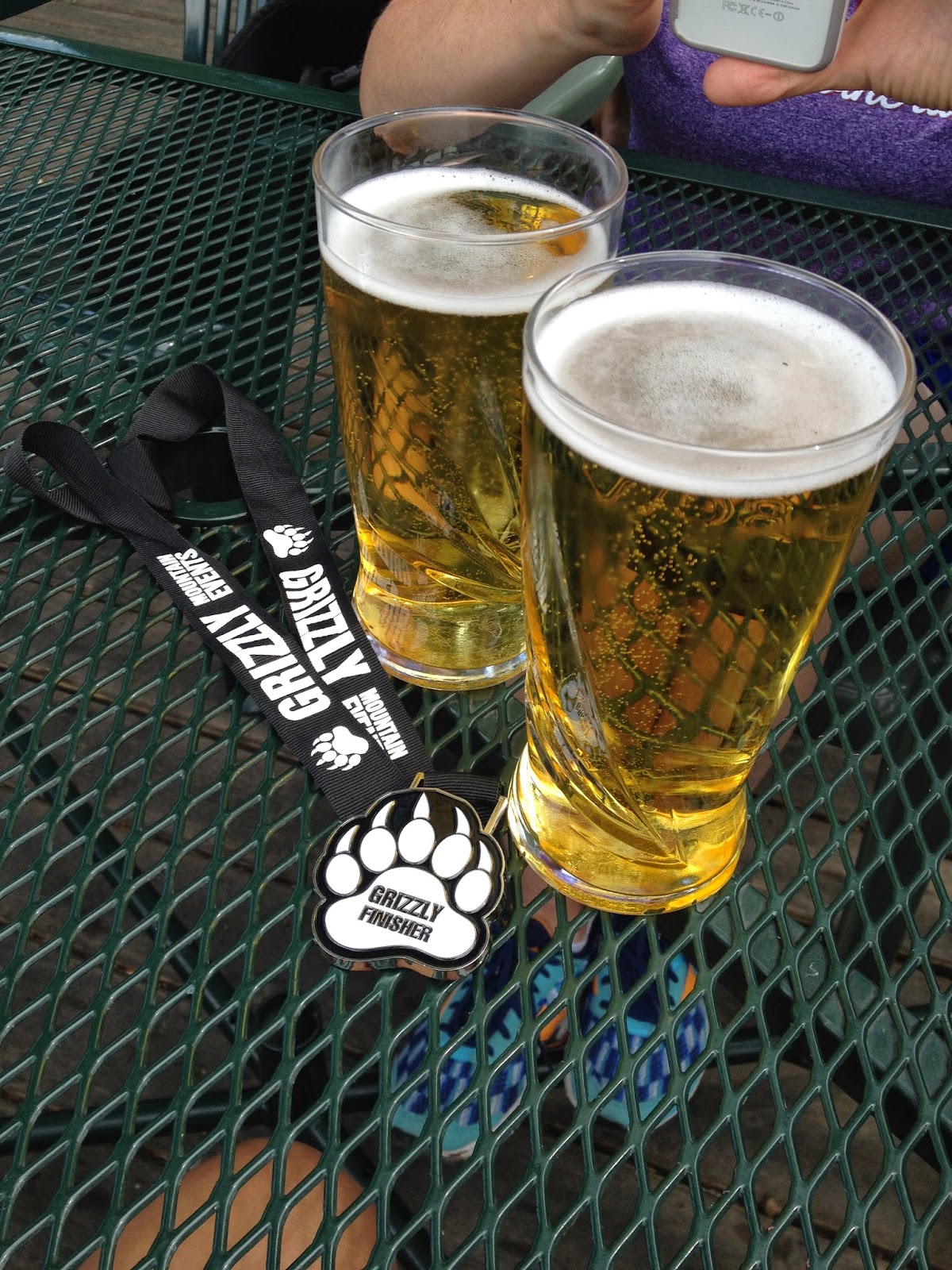 So how long did it take for Tara to ask me if I wanted to do a 2 person Grizzly Ultra in October??

only took....
about one hour and one cider!
HA!
We are going to rock it in October....look for the BadAssUnicorns
to rip up the trails at the Grizzly Ultra 50km relay!