Today's halfmarathon was brought to you by bitchy mother nature. But really...sign up for Last Chance Half Marathon and you take your chances. November weather in Alberta (Calgary in particular) means maybe snow, maybe not. Maybe Deepfreeze. Whatever she dishes out is what you get. 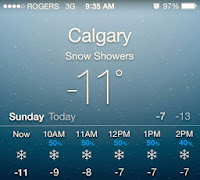 Snowfall overnight. Not a lot a few centimetres.

I got up nice an early actually, to eat properly, ensure I hydrated in an optimal way. The beauty of a winter run means it starts LATER in order to allow the temps to warm up. So a 10 am start is kind of a bonus.

Got to the race a bit early to go to the bathroom (twice) before the race. And test the layering. yes cold, but no wind (so far so good). 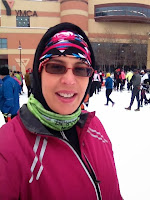 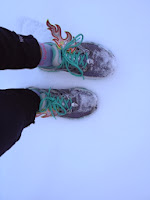 Then ran into Michelle, Susan, Leana...and there were a few others I didn't see until on the pathways...Saskia, Leigh! Bunch of hardcore Calgary tweeters and bloggers getting out there!!

I started the race with a goal. But it was a tad lofty since I am still suffering some fatigue and other effects from having shingles a few weeks ago. But I have been feeling more energetic and strong, so wanted to try to get in a "good" run. First few K definitely on target.

Michelle was ready and willing to pace. But really, with the snow and the slicker nature of the pathways meant pace sometimes was slowing own then speeding up.
A lot of the race was spent running alongside Michelle, Susan and Kevin (Sue's Fabulous Hubby who laughs at our silliness). At one point (prob the highlight of the race) was when Susan and I has passed a bit of time by having a #curseoff. Funnily enough Kevin and Michelle were chatting behind us, so they missed this infamous exchange. Seriously this should have been filmed. We would be YouTube sensations by now had it been captured. Never fear...plans are in the works to recreate this fabulousness in February at the next planned halfmarathon!

We kept trudging through. 10k still felt pretty good. The paths got snowier (the second half of the race were on some lesser used paths. Honestly I think I slowed down as the race went on. Kilometre 11, 12, 12 got kind of nasty. Ice hiding under snow. UGH! So pace slowed again. I tried my level best to push when I could. AT one point I was grumbling (whining) about my pace and being too slow. Michelle kindly pointed out to me to just enjoy the run. She's right. Sometime Fatty Voice pipes up in my head...So I laughed and told Michelle to yell at FV ...shut uuuuuuuuuuuuuuuup fatty voice! It helped :-) (Thank you for kicking my ass!!!)

And then a familiar voice started yelling and cheering. It was the race director of the famed Loop Around the Lake (remember that horrible halfmara that wasn't?). Thing is he recognised me. WTH? I chuckled and pushed on to the turnaround. And on my way back I passed him. He is jumping up and down and is being a rather awesome cheerleader, high-5ing and saying less than 5km left! Well thank Christ, to be honest. Legs were burning, damn snow! ha!!! But hearing that number is slightly invigorating.

I notice Michelle picking up the pace and do my best to chase her. I do not chase her that well! But I get some good pacing back on track. For most of the way I can see Susan and Kevin, then a few twists and turns and I have no one in front of me or behind. Yet I know there are still people behind me.  I lose a little pacing and then have a bit more water. And get back into plan of "let's get this puppy done". I knew I was off pace...but at this point it is more about staying strong. The extra snow means more work and slower pace. Accept, and press on.

I'd had a fun exchange with a work colleague at the last water station, spirits buoyed. And was feeling better about my pace and finishing strongly. And then I wiped out. I don't even know what the hell happened. I just STOPPED moving, and was unable to get footing. As I took a header, my hip and shoulder rammed into the ground. I think I pushed up with my hands to keep my face from hitting. (Are you kidding me, I just had $2,000 of dental work done - new crown). There might have been a meltdown if I has lost teeth. I had trouble breathing, felt all freaked out and disoriented. I think I lied there for a minute. The people in front of me were a bit too far to call out to. No one was close behind, an as I was getting up a runner (but not a racer) came running toward me. I slipped an fell again, then she helped me up. GAH!!!! 2 km left. I was so pissed. I tried running, but had issues getting my pace. I finally got back my groove, and turned the corner and started the last climb up to the Eau Claire bridge.

And wouldn't you now it?  Someone yelling and cheering me on...saying push push you can do it!!! Oh the infamous race director. Man! He moved from one spot to another. He's good at that. Just like Chestermere. HA! Honestly having him at the bridge entrance meant I had less than a kilometre to go. Cori is gonna laugh when I say I was pretty happy to see him!! I pushed pretty hard to get to the finish. I saw the clock (2:45) and crossed and, if I am being honest, was not at all happy. Immediately I see Susan and Kevin. She is cheering me on and gives me a hug. I tear up. She says you can't be unhappy!! No! You rock you just finished this bastard. I swear, she might swear as much as me!!! HA! (Note: afterwards on Instagram she christened the race Winter Bollocks HalfMarathon...so TRUE!) 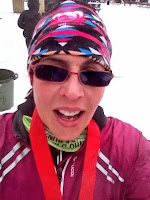 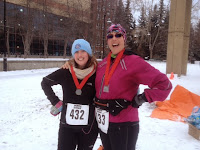 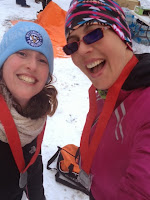 So we walked into the pub that was serving us lunch to see if we could find Leana and Michelle. Ra into Sakia who then handed me a Calgary Marathon training toque! YAY! (see...runner brain, be mad at run one second and the next talking the next race....sheeesh) It appeared no food was left, so Michelle and Leana were leaving. I wanted to snoop an see if I could grab a pancake or 4. So Tara and I went in to eat a bit. Thank go they brought out exptra pancakes! We sat an bitched about the weather (a very Canadian past time!) an laughed about certain areas of the pathways of destruction.

It was a tough race all around. Not my day it seems. It takes a bit to get over shingles, energy and stamina levels still not right back where they should be. But I got it done. And, am pretty am grateful I didn't sprain of break anything. I am also grateful for The High-5s and cheers along the route (from volunteers, fellow runners - AWESOME!). Especially to Michelle and Susan for their laughs and company (and ass kicking) before during and after the race. Love it when your friends are right about just enjoying the run!!! Sage advice.

And also a congrats to my pal Tara who walked this half marathon! She started 30 minutes earlier than the race so didn't see her til afterwards. 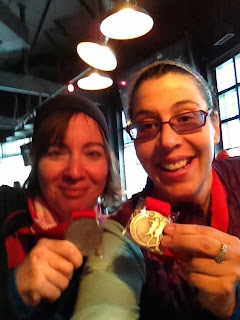 So....now to think about next year...I need to bust this slump.
I think I really have to work hard and focus on training harder and smarter!

ps- Does anyone south of the border wish to adopt me? Warm Climates preferred!!