Summer is Coming!! That means for many of us runners race season is upon us. For some of you, you might be wanting to also do a little volunteering. I have run a FEW races, and I have to say one of the most important jobs is the WATER STATION. After more than a couple races over the years that lacked water, I wanted to say ...OMG this is soooo important! And take the opportunity to provide a few tips on HOW to rock that water station.

In any race, hydration is important. No matter how big or small a race is, water stations can be a little intense. In the past several years, I have manned stations where no one else had even run a race let alone handed out water. I mean, really, how hard could it be?

Actually...it can be tougher than you think. But if you have only a few folks handing out water to a few hundred runners in a very short time, it can be a fast and furious experience. Don't get me wrong, it may be intense but is also super FUN!!

So, in case you or someone you know is manning a station...I came up with some tips to help you be the most FAB aid station volunteer EVER! This is (of course) my opinion but comes from running races where aid stations were really awesome or really sucky.

Just wanna say this is MY opinion on helping at a water station.
Check with your Race Director or Volunteer Coordinator to know what their procedures are.
Big Races have procedures for a reason - cause they have thousands of runners!!
And prep is so very important!

ARRIVE EARLY
Be at your aid-station at least 30 minutes before the lead runners hit your aid-station. Depending on the size of the event and the amount of stuff (gels, pretzels, water, electrolytes, etc) you may even want to arrive 60+ minutes before the start. ASK your volunteer coordinator or Race Director what they recommend - as every race has different needs! Why so early?  There is a prep work to be done BEFORE any runners arrive. You want to have it all done and be ready and waiting before runners arrive. Tasks include setting up the table, preparing and filling the water/nutrition coolers, filling hundreds of cups, organizing the stuff (you might have gels or snacks depending on the race), and setting up garbage cans.

This stuff takes time to do and there is nothing worse than a hundred runners descending upon you like a herd of velociraptors and you do not have water even poured or ready to go.

Trust me, that is stressful for you and the your fellow volunteers. And it is confusing for runners too. Prep work ensures smooth processes!

Organize the Gel/Food/Water
When organizing your tables, position the calorie items as the first thing the runners arrive to so they can wash the food down with some additional water before leaving the aid station. It is no fun to have a gel (or pretzels or any food) in your mouth and no water to wash it down. In larger events, I have seen stations be organized with LOOONG tables  -- water first, calories in the middle, and water again at the end of the aid station area. This is an awesome way to go!

Spread Out
On prep for runners arriving at the aid station, it is so important for spread out from one another. You want to give runners ample opportunity to grab water. And, if you have  a ton coming all at once it is NOT a good idea to have all of the runners trying grab a cup within a squooshed up area. That way more folks can grab and go!

Let Runners Come To You
Depending on how many volunteers and the size of the race, I prefer when vollys position alongside the road inline with the tables. 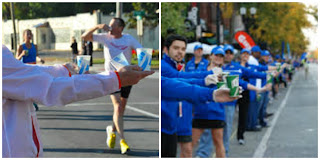 At trail events...the is often more stoppage and more food...but often less congestion too. Regardless, you want to allow those who want water to move to you. This allows those runners who want to fly by to do so.  It can get a bit confusing and frustrating for runners if there are people handing out water in the middle of the road. Standing in front of water table is good. Standing in middle of pathway so runners have to go around you is NOT good.

Many runners bring their own hydration.
Have a JUG and someone handy who can help refill the bladder in someone's backpack or handheld. THAT is so very helpful!

Place Garbage Cans Far Far Away
Many races provide garbage cans to toss in your cups or garbage. Often, I pass the bin before I am ready to dump my cup. I think placing the garbage cans in a staggered fashion twice as far away from your aid station as you would think. That distance comes a lot quicker when you are running. This should hopefully help more runners toss their garbage in the cans and require less cleanup on your part. Another bonus to having the garbage cans away is that it keeps people moving through the aid station. Also, make sure you have folks who are checking up along that route to clean up so that nothing is left behind! As a runner I keep the empty gel packet on me unless there is a bin right there- I try not to litter. I also try to carry a small handheld and do not take a cup - less waste!!!

The Art Of The Hand-off
I decided to SHOW how I think the best way to pass off water to folks instead of trying to explain. After a run one night, I asked several people to demonstrate "if you were at a water station how would you hold the cup" ...the resounding majority showed me THIS: 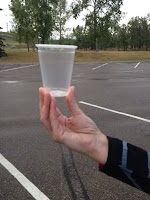 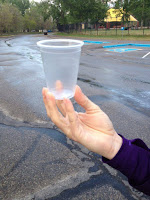 See holding at that bottom ensures an easy grab and go. some people say you could hold on the top rim...but i say nooo cause it makes me think of germy hands (i am sure YOURS are clean but...) on the rim where i will be drinking from!

Another helpful hint for passing off water is to hold the cup at waist level - it is WAY easier for us runners to grab the cup while running. And, have someone who's job it is to keep an eye out on the table. You have had a rush of runners and then you look and your table of filled cups are gone due to the flurry of runners. What do you do? Line up those empty cups on the table in rows and start  filling them using some hand-held pitchers. The cups will fill much quicker than using the tap on the coolers.And do not fill them to the top! Whew! Panic moment over. 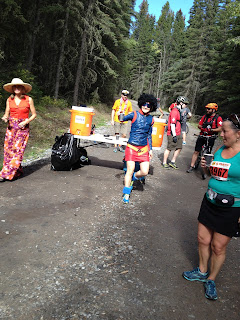 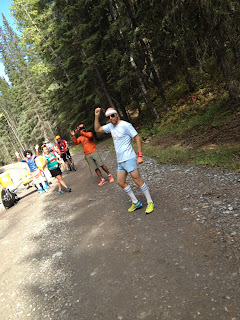 And finally…
Have fun out there!
You are so important to us runners.
You give us hydration AND support!
(and sometimes laughs and a dance party)
And from the bottom of our runner hearts THANK YOU!
Posted by Unknown at 13:08